1 888 653 6028   /   289 807 2400   Apply Now
Announcement
TRAVEL UPDATE: We're open! Where can I go? and answers to your questions about COVID-19
Zaytoen
Domingo
Zaytoen Domingo is a content writer and editor based in Cape Town, South Africa. She is currently enrolled in the Masters program in English at the University of the Western Cape. After graduating with an Honours Degree in English and Creative Writing, Zaytoen completed a skills-development program for writers and became an alum of the GVI Writing Academy.
Marine Conservation Wildlife Conservation
0 Likes
Share
Facebook
LinkedIn
Twitter

The sixth mass extinction: Make an impact this Earth Day 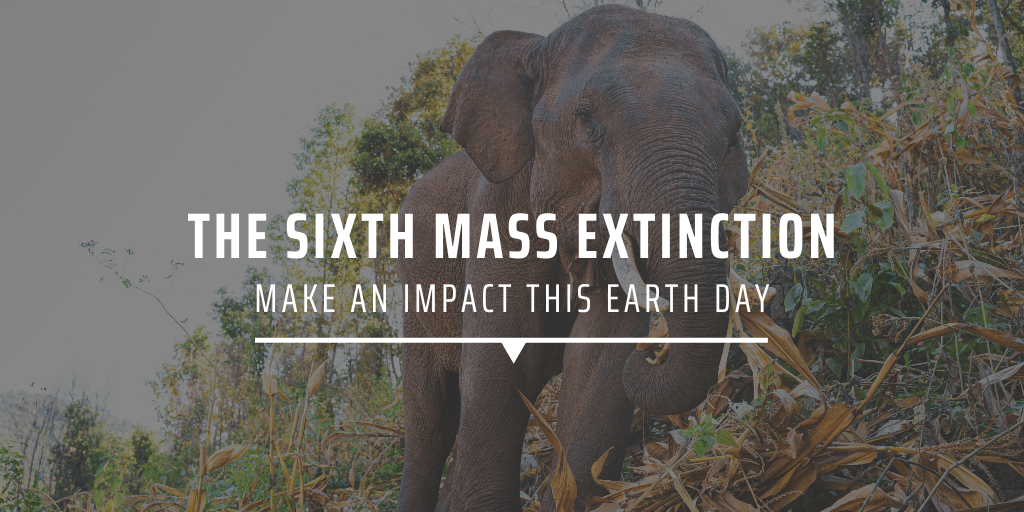 Every year on 22 April, people and organisations around the world celebrate Earth Day. And, with the world currently facing its sixth mass extinction, celebrating this Earth Day might be more important than ever before. Let’s find out more.

The first Earth Day was celebrated in 1970, when millions of activists in the United States of America (USA) took to the streets in a massive protest to raise awareness around environmental depletion. The protest made such a big impact that the date of the protest, 22 April, was marked as a national day in the USA.

The day gained more and more support each year, and after two decades, Earth Day became an annual event celebrated by people and organisations all over the world. Original photo: by Li-An Lim is licensed under CC BY 2.0.

Each year, people and organisations around the globe commemorate the day in different ways. In 2016 for example, the United Nations chose this day to formally adopt the Paris Agreement into its global framework. The Paris Agreement is an international treaty signed by countries around the world to mitigate climate change.

And now, with the sixth mass extinction happening, there are plenty of ways you can get in on the action this Earth Day too. Let’s start with finding out more about the cause of this mass extinction.

Further reading: Environmental awareness and how you can get involved

The age of humans But, what is the Anthropocene and what can we do to mitigate the effects of it?

The Anthropocene is what some scientists call the period that we live in now, when human activity has led to significant changes in the natural world. These changes include things like global warming, habitat loss due to deforestation, mass coral bleaching and species extinctions.

Further reading: How to cultivate environmental awareness in schools

As people and technology evolved over time, the use of natural resources has increased, industries have grown, and natural environments have been destroyed to make more space for the growing human population.

And as the human population increased over time, our effects on the natural world increased too. So, what does this mean for the sixth mass extinction? Unnatural changes to the natural world have led to major disruptions in the animal kingdom. According to a report by the United Nations on biodiversity and ecosystems, approximately 1 million plant and animal species are now threatened with extinction. This has caused a massive loss of biodiversity, both on land and below water.

In the report, biologist, Doctor Josef Settele, had this to say: “Ecosystems, species, wild populations, local varieties and breeds of domesticated plants and animals are shrinking, deteriorating or vanishing. The essential, interconnected web of life on Earth is getting smaller and increasingly frayed. This loss is a direct result of human activity and constitutes a direct threat to human well-being in all regions of the world.”.

A study published by the Society for Conservation Biology found that 70% of megafauna species are decreasing and 59% are threatened with extinction. This is caused by human activity like overharvesting and poaching.

Deforestation caused by the development of industries and infrastructures had led to the destruction of 50% of forests by 2015. Forests around the world house more than 80% of biodiversity. And, by 2030, it’s estimated that only 10% of the world’s original rainforests will remain. Deforestation leads to a loss of species, a decrease in biodiversity and a disruption of natural ecosystems worldwide. In fact, by 2032, it’s estimated that more than 70% of the Earth’s land surface will be destroyed, fragmented, or disturbed by large-scale infrastructure like cities, roads and mines.

“The health of ecosystems on which we and all other species depend is deteriorating more rapidly than ever. We are eroding the very foundations of our economies, livelihoods, food security, health and quality of life worldwide.” – Sir Robert Watson, chemist and expert on ozone depletion and global warming, in the Intergovernmental Science-Policy Platform on Biodiversity and Ecosystem Services (IPBES) Global Assessment.

And, deforestation also adds to the increase in global warming, with 20% of the world’s greenhouse gas emissions caused by the loss of tropical rainforests. The overheating of the planet has led to a global climate crisis, which has resulted in the hottest global temperatures on record in the past few years. This in turn affects biodiversity loss and natural resources.

This crisis affects humans too. Malnutrition, malaria, diarrhoea and heat stress lead to an increase in mortality rates of up to 250,000 people per year.

Further reading: Life on land: Why safeguarding the environment is so important Did you know that more than 500 million people worldwide depend on coral reefs for food, fishing to generate an income, and protection from natural disasters like floods? In fact, coral reefs prevent approximately 94 million USD in flood damages every year. This is because coral reefs help to regulate waves by absorbing about 97% of wave energy that can lead to natural disasters.

But now, coral reefs are threatened by climate change, pollution and overfishing. Climate change is a major cause of coral bleaching – when coral reefs become stressed due to the overheating that’s caused by global warming.

Between 2014 and 2017, coral reefs around the world experienced the biggest impact. As much as 75% of coral reefs were affected by heat stress and almost 30% experienced fatal levels of stress.

That’s not all that’s going on underwater. Approximately 93% of marine life are overfished, and only 1% is protected from industries like fishing, mining and shipping. At this rate, the decline in the ocean’s biodiversity will keep growing and endangering more and more life below water.

Getting involved this Earth Day With all of these statistics, you might be wondering what on Earth you can do about it?

Well, whether you’re under 18, a college student, a professional or retired, you can definitely make a positive impact. You can volunteer or intern on a sustainable development program abroad and contribute towards marine and wildlife conservation projects.

Go snorkelling alongside sea turtles and octopuses in the Andaman Sea when you get involved in coral reef research and conservation in Thailand. Or, go scuba diving in Seychelles or Mexico and contribute towards critical marine conservation research while you get your PADI Advanced Open Water and PADI Coral Reef Research Diver qualifications at the same time.

Not keen on getting your toes wet? That’s okay. You can walk the arid African safari on a wildlife research expedition and get the chance to see buffalos, elephants, lions, leopards and rhinos while collecting valuable data for their conservation. If greenery is more your scene, why not join a jungle expedition in Costa Rica’s Tortuguero National Park? Here, you will observe and collect data on wildlife species in their natural habitats in the forest. See signs of jaguars, monkeys, neotropical birds and more as you stroll under lush green canopies.

And if you’re not keen on travelling just yet, you can also support a conservation project by making a donation towards a cause you care about.

Get in on the action to mitigate the sixth mass extinction this Earth Day with GVI.

Six smart ways to make the most of a gap year before law school
Read More
Six critical global issues: What are the world’s biggest problems and how can I help?
Read More
What is a green job and how do I land one?
Read More
Apply Now
Enquire Now
Call Back Request