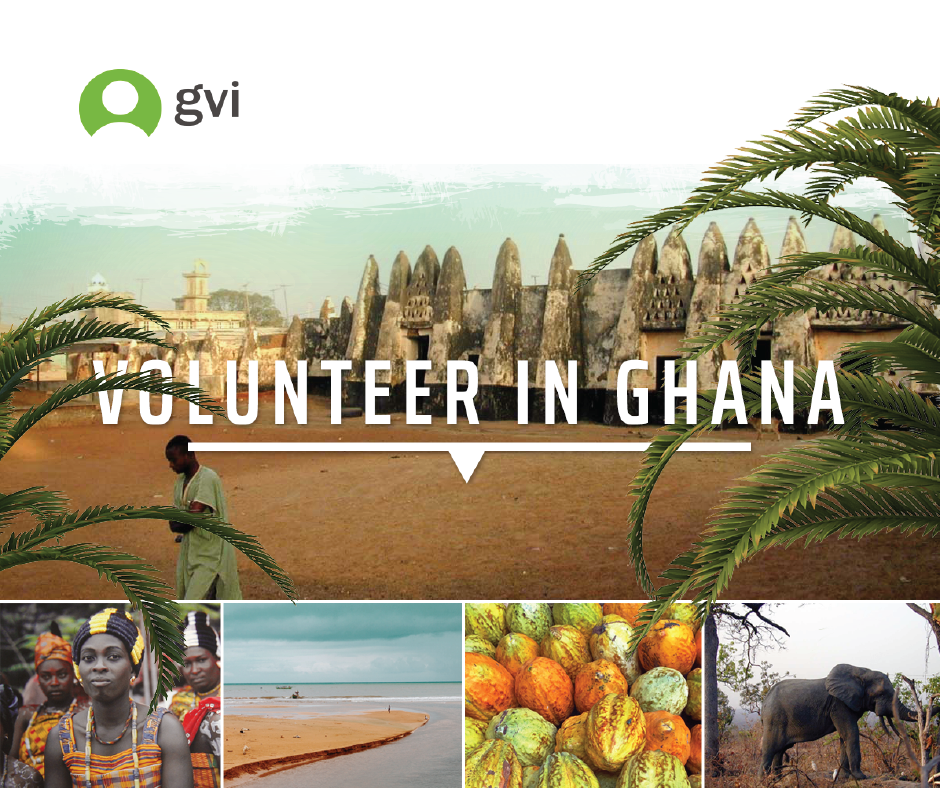 How much do you know about Africa? Have you ever heard of Ghana and thought to yourself, ‘I want to know more?’ Here’s the only infographic you’ll need to learn about the facts, history & culture around our base in Ghana, Africa.

If you would like to find out how you can contribute to making a difference in the local community with our pioneering new community development programs, visit our program page for more information.

Ghana is in the West Africa region, on the the side of the continent that is closest to the Americas.

The weather is very tropical, the country being right on the equator. The country is about equal parts s&y desert, shrubby savannah & lush rainforest.

In ancient times, the region was a hotly contested place by several African empires. The Ashanti Empire was able to maintain control of the coastal region, which led to trade with the British Empire.

In 1957, Ghana became the first self-governing country on the African continent under president Kwame Nkrumah.

Today most Ghanaians are Christians, which is influenced by traditional religion, a form of pantheism known as Akom. A favorite spirit of traditional Ghanaian storytellers is Anansi, a swindling spider, represented in the Neil Gaiman’s novel, American Gods.

One of the most predominant cultures, the Akan people, hand down riches & titles based on the matrilineal line. However, men still hold the main positions of power in this society.

You will find tomato-based stews with complex flavors throughout Ghana. The stews usually include fish & are eaten with a dough which is used to scoop it all up.

Modern Ghanaians wear a mix of Western & traditional fashion. The traditional Kente cloth is made from cotton & silk with basket weaving to create brightly coloured stripes, which locals love!

The first names of children of Akan tribes are based on the day of the week they were born, which is said to influence aspects of their spirituality & personality.

If you’re ever in Accra & spot a huge fish or airplane sculpture being carried down a side street – that’s a coffin. The custom of creating elaborate coffins comes from the belief that life carries on after death – so a good impression must be made!

A straight-to-video film industry sprung up in Ghana during the 1980s. The films usually revolve around challenges faced by residents of urban Ghana. The largest media capital in Africa, Nigeria’s Nollywood, has even set up several partnerships with Ghana’s film-makers & actors.

Soccer is a national pastime in Ghana & their national football team are the Black Stars. They have won the African Cup numerous times & regularly go toe-to-toe with accomplished national teams like Mexico & Egypt.

We partner with women’s rights groups, primary schools, & organizations that work in several underprivileged communities to help them maximise their impact.