1 888 653 6028   /   289 807 2400   Apply Now
Announcement
TRAVEL UPDATE: We're open! Where can I go?
Tasneem
Johnson-Dollie
Tasneem Johnson-Dollie is a travel writer living in South Africa. She has experience in public health nutrition and worked as a dietician before launching her writing career. She loves bringing her passion for public health and sustainable development to every article she writes. Her travels around South Africa as well as to India, Australia, and Saudi Arabia have fueled her passion for exploration.
Kerala Travel
0 Likes
Share
Facebook
LinkedIn
Twitter

Travel to Kerala to taste more about its history These photographs were taken pre-COVID-19.

Travel to Kerala, India and you’ll get a taste for how diverse the country’s cuisine can be – and learn more about this region’s history and culture from its food.

Kerala. The word itself sounds crispy, even spicy doesn’t it? Well, this Indian state along the Arabian Sea’s shoreline sure packs a flavourful punch when it comes to cuisine.

And its food does more than just tell us how good at cooking its local people can be.

Kerala is a region where Arabian, Chinese, Dutch, Indian and Portugese culture have been whipped up into Kerala recipes with distinct flavours.

Let’s travel to Kerala through our taste buds, and see what Kerala cooking can tell us about the region’s past, present and future. 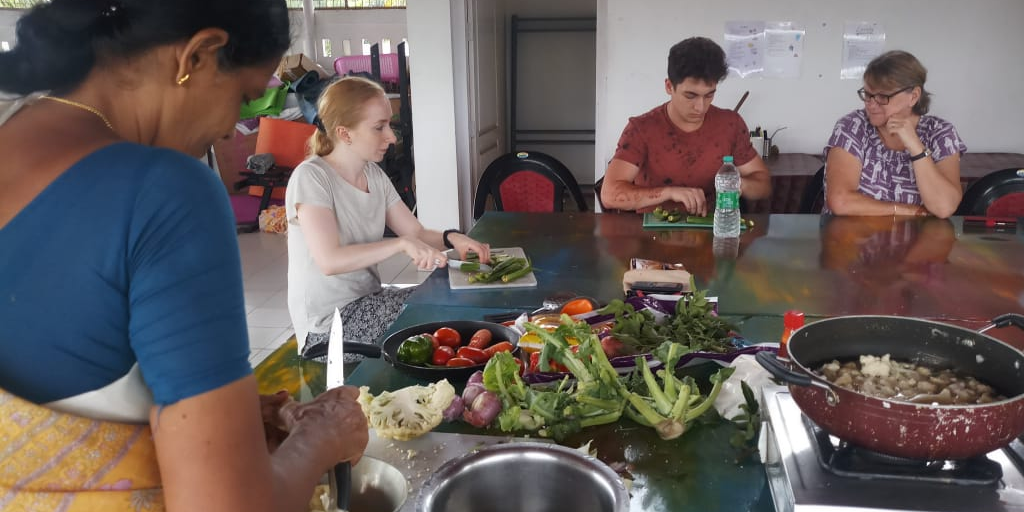 Getting up to speed with Kerala spices and ingredients

Think Indian ingredients and a few key images may pop into your mind: teepees of red and yellow curry powders, an array of pale green or dark brown seasoning pods, and a range of rices and flours to be turned into some spectacular, starchy side.

Travel to Kerala and you’ll spot all of these tell-tale ingredients. But you’ll also get an eyeful of some things you may not have expected.

Kerala recipes include a mix of vegetarian and non-vegetarian ingredients (displaying its links to Hindu culture as well as others), cooking methods that span many different continents, and spices that have travelled across entire oceans just to find their unexpected partners. 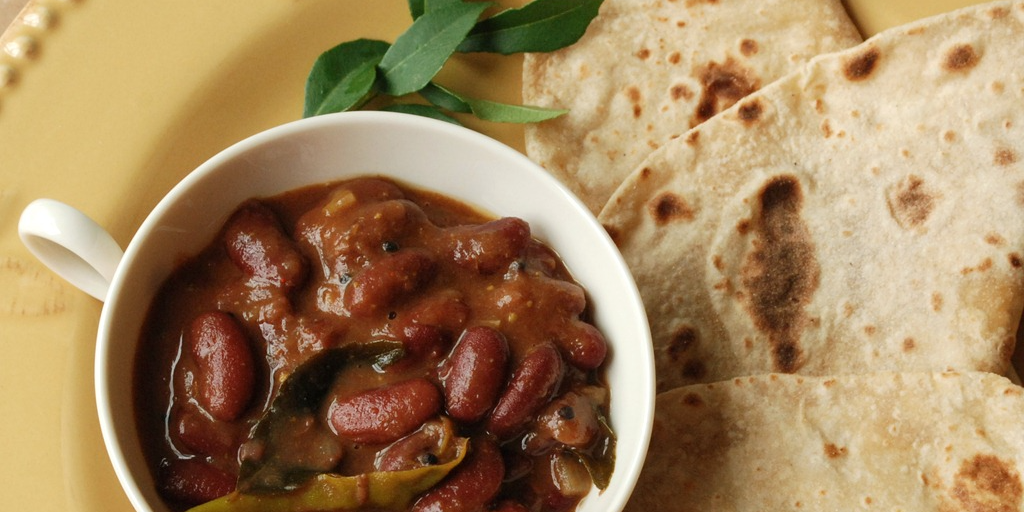 The region is located in tropical terrain, along a coastline and with more than 40 rivers running through it. And this setting has had an incredible influence on Keralan cuisine.

The abundance of water and lush green landscapes make it one of the most fertile areas in India. Because of these nurturing soils, Kerala, India is a place where coconut palms are commonplace. In fact, Kerala is derived from the local word kera, which means coconut.

So, when you’re scouring the markets, you can expect to see piles of deep brown coconuts – just waiting to be cracked open – sitting alongside those signature Indian ingredients.

And with the Arabian Sea and backwaters of Kerala bursting with fish and other aquatic life, seafood is a big part of the diet of local people.

So, while you won’t be hard-pressed to find curry, you’re more likely to be served up mussel curry, or a wide variety of fish curries with some coconut in the mix when you visit Kerala. This region is one of the places where these types of dishes are much more common.

When you visit Kerala, you’ll also see that rice – one of India’s staple foods – is always on the menu, but Kerala rice recipes put their own spin on a continental favourite.

The region’s rich soils are one of the only places in the country where matta rice grows. This red-coloured grain is a stand-out ingredient in Kerala cooking.

Kerala rice of the matta kind lends a distinctly earthy flavour to the dishes it’s served up with and is known to be more nutritious and higher in fibre than white rices. 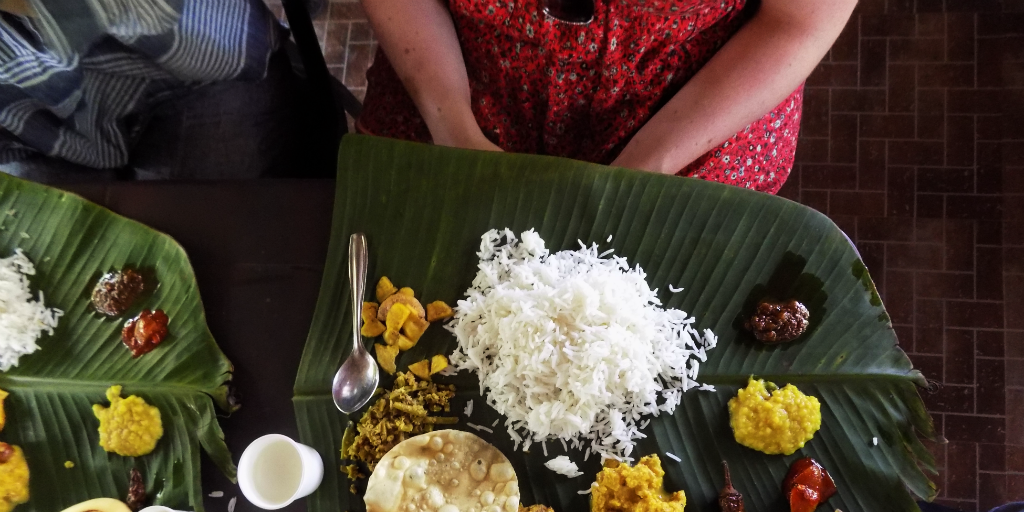 A peek into Kerala cooking

Cooking with black pepper, cardamom, cinnamon, aniseed, cloves, cumin and coriander may seem distinctly Indian, but there’s another side to the story too.

The persistence of these ingredients in Kerala recipes is also due to the fact that the traditional dishes eaten by the Arab, Chinese, Dutch and Portuguese immigrants that settled in Kerala included most (if not all) of these spices too.

So, the combinations of flavours you’ll taste when you travel to Kerala are a somewhat disguised display of the region’s culinary diversity. 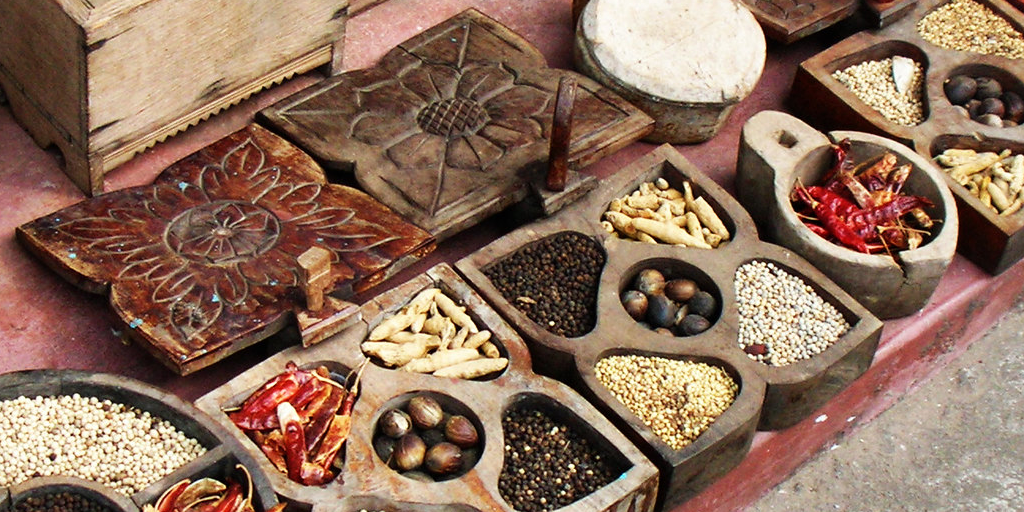 Then there’s Kerala cooking methods, which are a much showier portrayal of the cultures the state is influenced by.

Well, when you actually visit Kerala, India, you’ll get to see first-hand the vessels and utensils used for cooking Kerala recipes. And these items are a much bolder testament of the region’s cultural diversity.

Chinese-style bamboo steamers, Dutch-influenced wooden spoons and spatulas, Arab-inspired pots and pans, and Portugese-style salt cellars can be found in homes and restaurants across the state.

And if you step outside of the eatery and take a gander around town, you’ll also see Dutch and Portuguese-style houses, Chinese fishing nets and Arab-influenced textiles – like the patterned cloth draped over outdoor furniture – at one with the local scenery.

Places to visit in Kerala, India, to taste the region’s top cuisine

Kerala is a big place, with around 580 kilometres of coastline to tour. So, how do you know where to go to taste the best cuisine when you travel to Kerala?

We’ve got you covered with a list of Keralan districts that cook up some of the top Kerala recipes.

Here are three of the best places to travel to in Kerala, India to taste the region’s top cuisine. 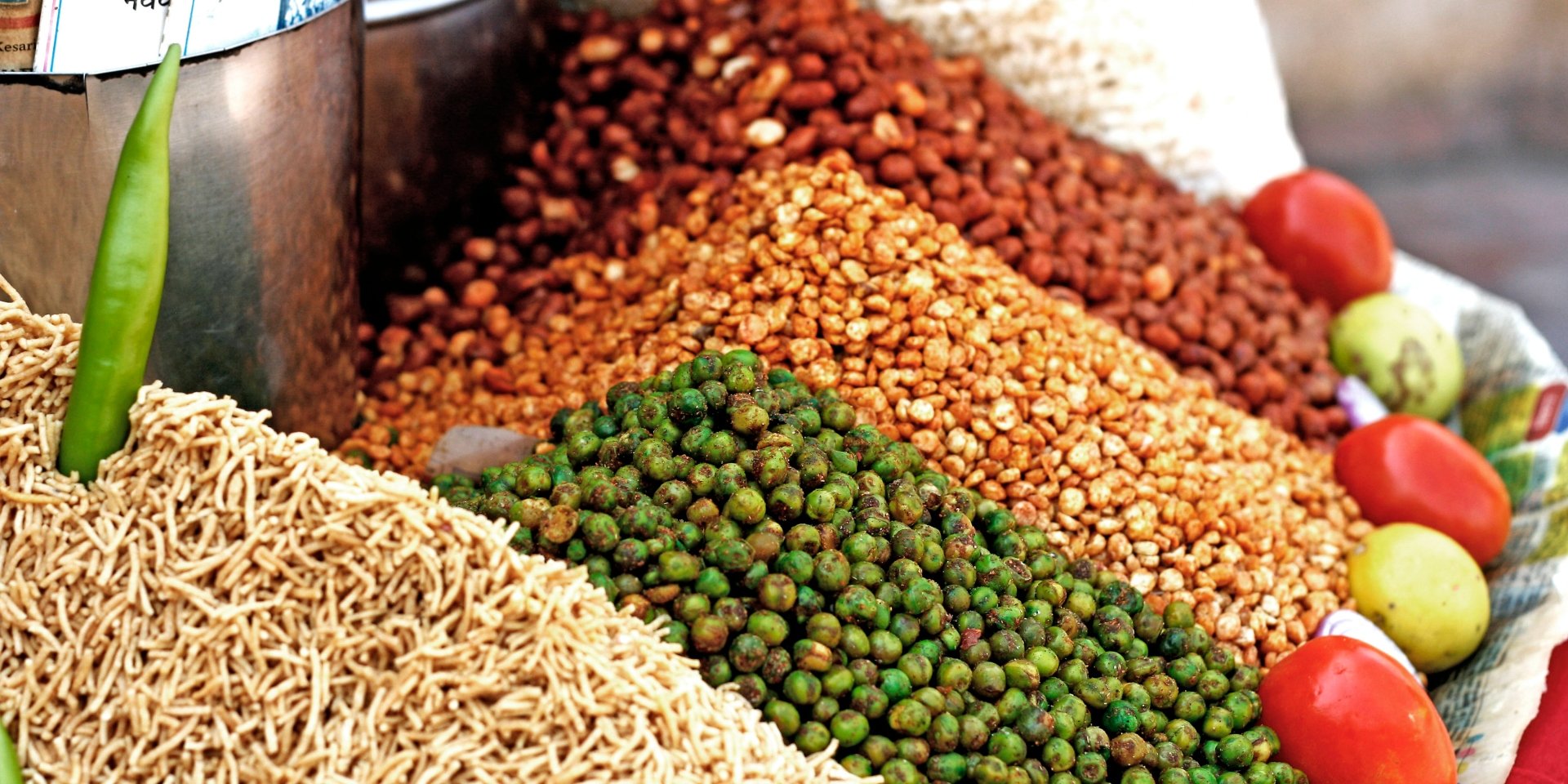 At the centre of Kerala, in the city of Kochi, the vibrations of a buzzing city bounce off of centuries-old landmarks like the Sree Padmanabhaswamy Hindu temple, Cheraman Juma Masjid (a mosque) and Kottakavu church – some of India’s oldest religious buildings.

Ernakulam is a nearby district and has been an Indian trade port of importance for decades. Through trade, many different cultural influences arrived in Ernakulam via Kochi’s shores. 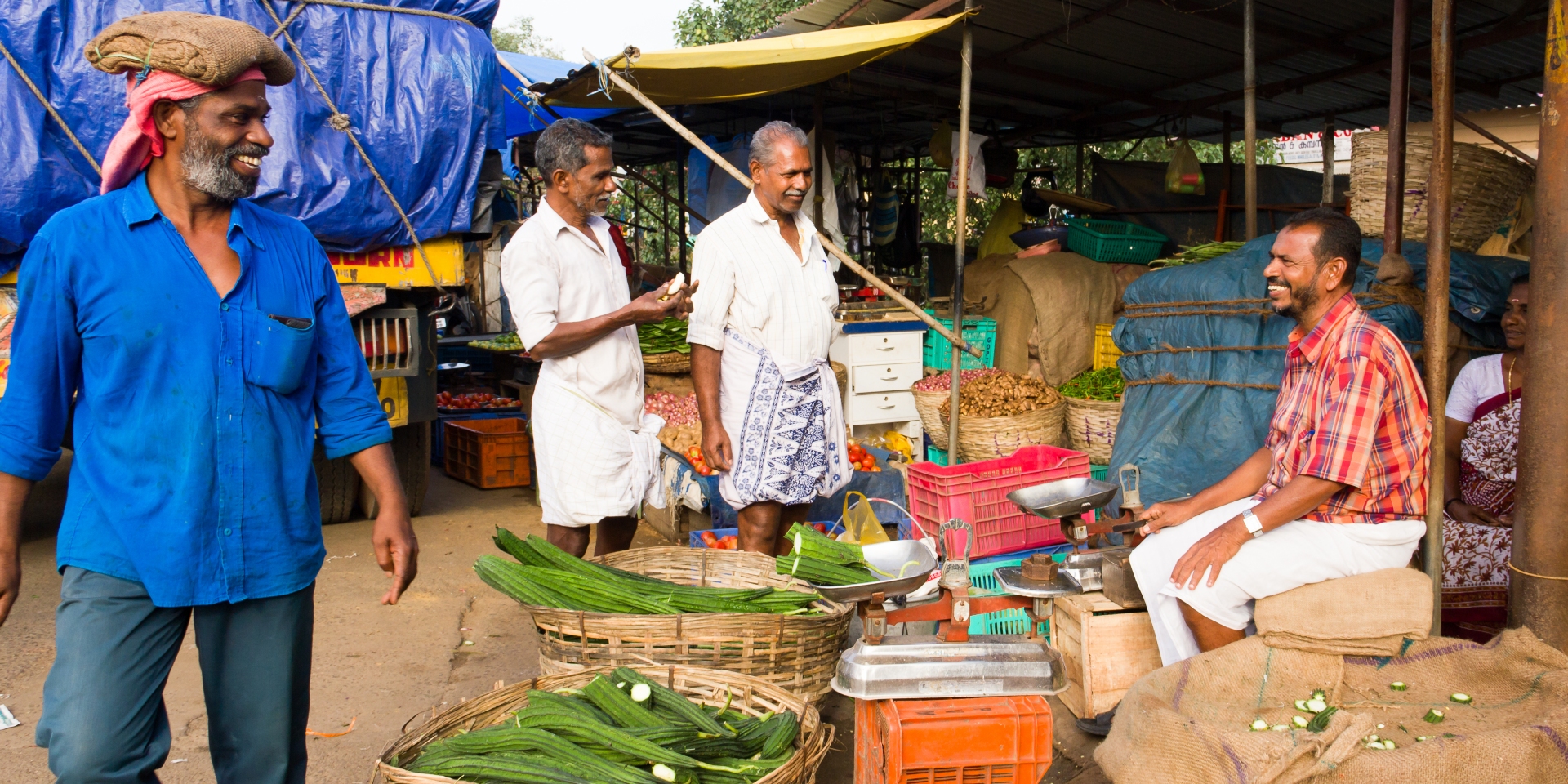 Original photo: ‘“If you can laugh together, you can work together.” – Robert Orben.’ by Anoop Kumar is licensed under CC BY 2.0

This district’s food is where you’ll see a coming together of Kerala recipes new and old, the mixing of myriad cultural flavours, and a street food scene that’s a tapestry of Kerala’s culinary history.

The area is also home to some of India’s most visited waterways – the backwaters of Kerala – where you can take a boat tour down jungle-lined waterways while keeping an eye out for crabs, frogs, birds, otters, turtles and fish. You may even catch sight of what you’ll be eating that night!

During the Middle Ages, the district of Calicut acted as the country’s main port for spice trade, and was hailed as the City of Spices. 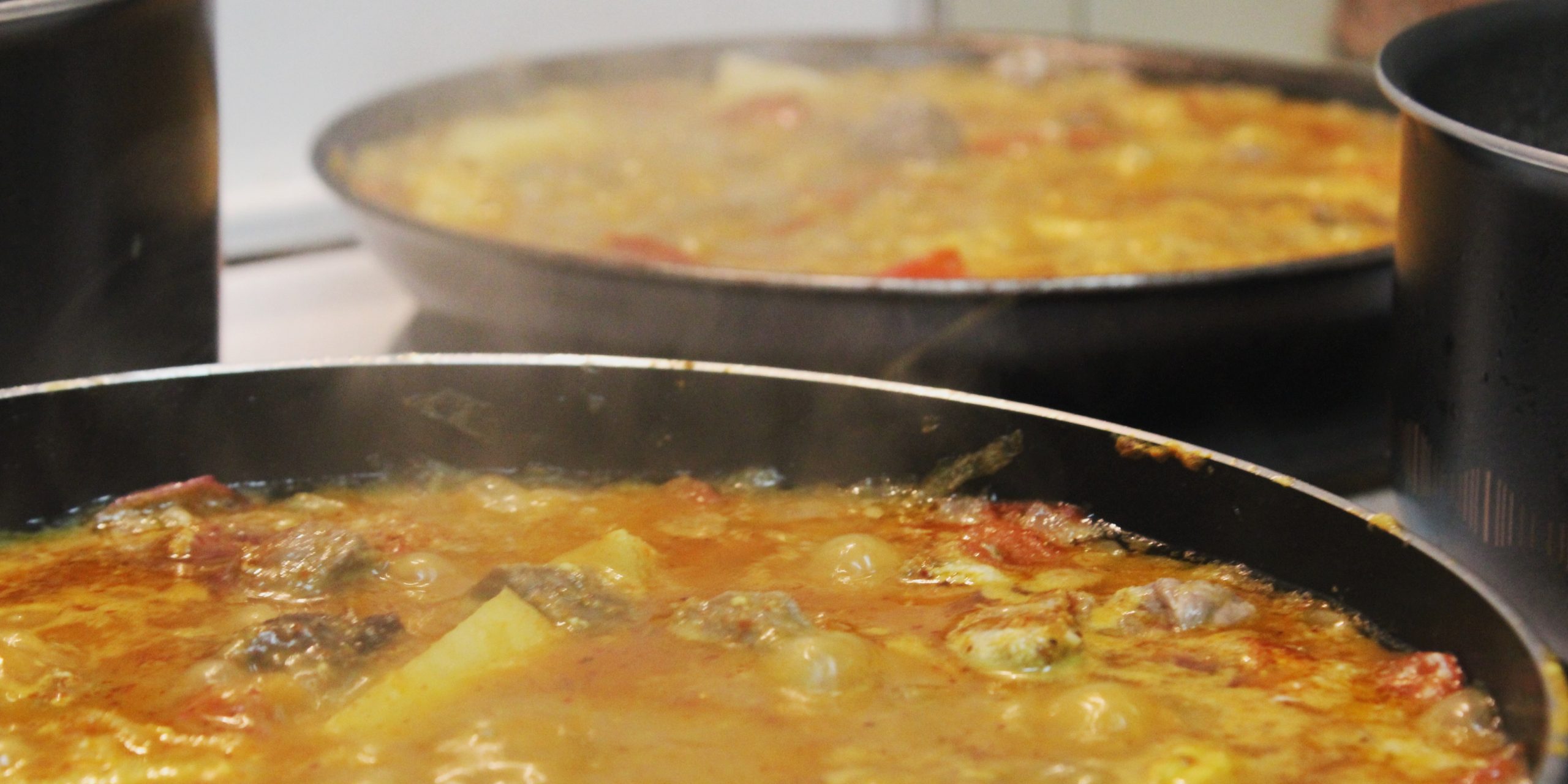 Original photo: “Biryani” by Isabell Schulz is licensed under CC BY 2.0

Travel to Kerala’s Kasaragod district and you’ll be heading into the thick of India’s biodiversity.

The densely packed rice and coconut plantations found here share the land with the plants and animals of Ranipuram National Park.

And, this sought-after site isn’t just about natural wonders. The greenery is also dotted with seventeenth-century forts and a whole host of Hindu temples and mosques.

As one of the least-visited districts of Kerala, Kasaragod has much to teach us about Kerala spices.

It’s well-known for its rice and fish curry, which are cooked in mud pots – a centuries-old tradition for cooking curry across India. 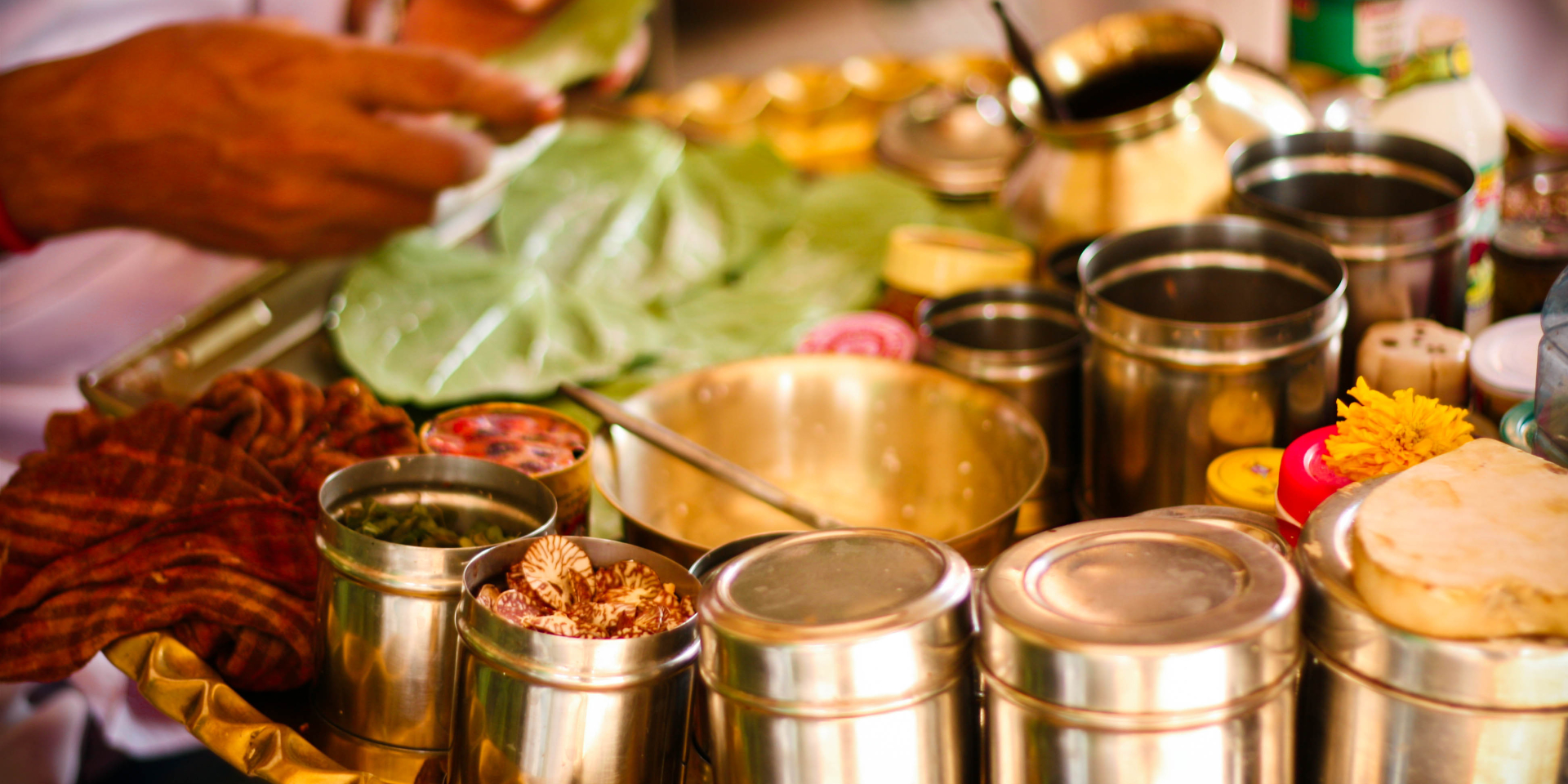 Original photo: “Untitled‘ by Y’amal is licensed under CC BY 2.0

As a GVI participant, you’ll live in one of the best places to visit in Kerala, India to taste the country’s cuisine – Kochi!

With Kerala spices available at every market, and Kerala recipes cooked up along sidewalks as well as in local eateries, you’ll get an everyday dose of the country’s food culture.

And while living in the community and working with local community members on sustainable development projects, you’ll learn how to pronounce the names of dishes, eat and even get involved in Kerala cooking yourself.

Further reading: A guide to travelling Kochi as a volunteer

And this will not only open up your global perspective, it’ll also give you insight into the history of Kerala that’s inseparable from the tastes and smells that are distinct to Kerala cooking today.

Take a look at our volunteer projects where you can travel to Kerala and have an experience that stimulates your senses and gives you first-hand insight into the region’s history.