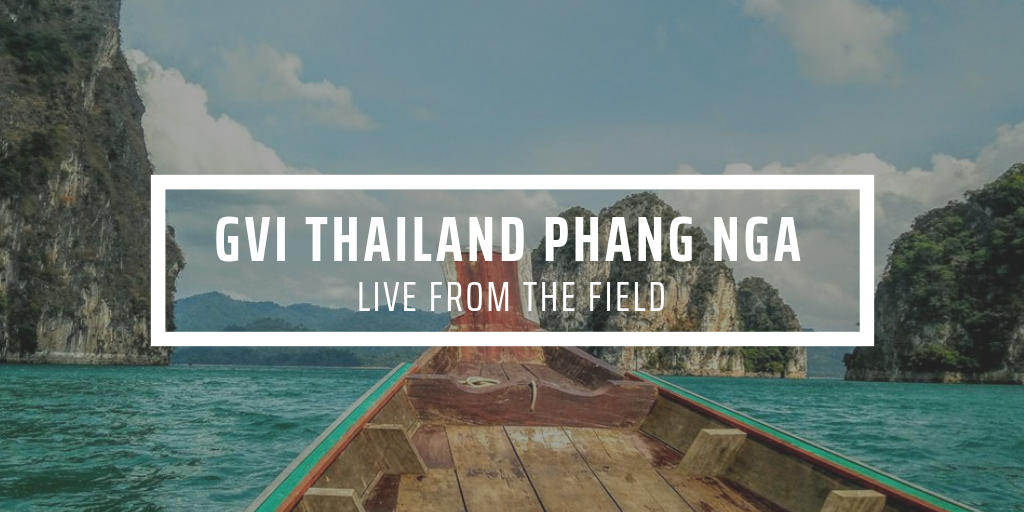 In Thailand, nature often commands respect not through environmental movements, but more so through spirituality. Besides having practical uses, many plants and parts of nature have a spiritual aspect as well that must be respected. It is here that it is obvious Thailand’s strong animist roots have not gone away, no matter if the country is predominantly Buddhist.

More Than a Hugging Tree

One of the most obvious animist practices is that of honoring sacred trees. People will tie ribbons around a certain tree or a monk may give it a robe, signifying its status. This can also be an effective way to keep a tree from being cut down. Now in order to cut it one must make many offerings or a sacrifice beforehand to ensure the spirits will not be vengeful.

The most sacred of all trees in Thailand would be the Bo tree, Ficus religiosa, also called the bodhi tree. It is a type of fig tree, said to be the type of tree that Buddha gained enlightenment under. Usually there is at least one at a temple, where it is not cut and becomes a sacred resting place for old spirit houses or broken religious idols. Its heart-shaped leaf is also a motif used in temple decorations –  such as the money trees in temples and shops. Maybe a tree is sacred because it is the home of a spirit. The Hopea odorata tree is believed to house a female spirit named Nang Ta-Khian. The area around the trees always appears tidy, as if someone was sweeping there. This may have given rise to her legend. She is usually a benevolent spirit. Many Thai people go to a Takian tree to ask her to reveal winning lottery numbers. They put some powder on the bark and look to see if any numbers seem to show up.

Another tree spirit is Nang Tani. She is a ghost believed to inhabit certain types of wild banana trees. Maybe ribbons will be put on the tree and its area is generally kept away from and respected. She appears as a beautiful woman in green traditional Thai clothing, with her feet floating just a few inches above the ground. Legend has it that if a man is desperate enough he can summon Nang Tani to be his lover. This is often not a good idea though, as she is incredibly jealous and if the man goes out with any other girl she will kill him. Maybe just stay single a little longer.

This by no means is all of the tree spirits, or nature spirits, but the ones I could find out most about as a farang on the internet.

More Than One Mother Nature

Sometimes the nature spirit is elevated to the rank of deity. They personify something bigger than a singular organism. The nature goddesses I have managed to hear about are Phra Mae Thorani, Phra Mae Phosop, and Phra Mae Khongkha.

Phra Mae Thorani is the principal of these three. She is the earth goddess and even has a prominent role in the story of the Buddha. The story goes that, as Buddha was nearing enlightenment, scores of demons started attacking him, trying to sway him from his goal. Mara, their king, was winning and would have all his followers to witness. Since the Buddha was alone, he asked, “Have you no one to witness you?” Buddha only set his hand facing the ground, to call upon the earth itself to witness his struggle. In answer, Phra Mae Thorani appeared and washed away the demon army with the torrents of water wrung from her hair. So even at every Buddhist ceremony, Phra Mae Thorani is always acknowledged. I have heard even when you go out and pick a plant or have to disturb something, or maybe if you need to pee in the woods, you must acknowledge Mae Thorani. The spirit of the rice is named Phra Mae Phosop. But to western people this may underrate the importance of the spirit a little bit. Rice is such a staple in Thailand that it may as well stand for life-force. Even when Thai people say they are going to eat a meal, the direct translation is just that they are “going to go eat rice.” She is given the “Mae” prefix, which means mother, since she practically provides life for her “children,” the people . She is prayed to at various stages of rice cultivation, though the biggest ceremony is during the April rice planting season, the Royal Ploughing Ceremony. A lot of stories have been created about her that explain the creation of rice and different types of rice: for example her body broke apart into four and became white rice, sticky rice, black rice, and ordinary. Often Buddha will be tied in somehow but this is a later addition to try to adopt her into Buddhism. In reality Mae Phosop has deep animist roots similar to other rice deities in Southeast Asia.

The last deity I can think of is Phra Mae Khongkha. She is the Thai version of the Hindu goddess Ganga, spirit of the sacred Ganges river, but in Thailand stands for waterways in general.  I think often she gets confused with Mae Thorani, as their iconographies are similar, and therefore I don’t have a lot of information about her. But for sure the goddess associated with Loy Krathong is called Phra Mae Khongkha. This is a wonderful festival where people make beautiful banana leaf floats with offerings of flowers, incense, and candles, and send them off into a body of water. The offerings are to the waters, or to Mae Khongkha, to both respect her and ask her forgiveness for polluting her. Truly environmental tradition if I ever saw one. Well those are all my anecdotes for this topic. Every day I learn a little more about Thai culture and its depth is really something to gaze at. This is just the tip of the lotus bud but I hope you are inspired, or intrigued by these wonderful old Thai stories and traditions.