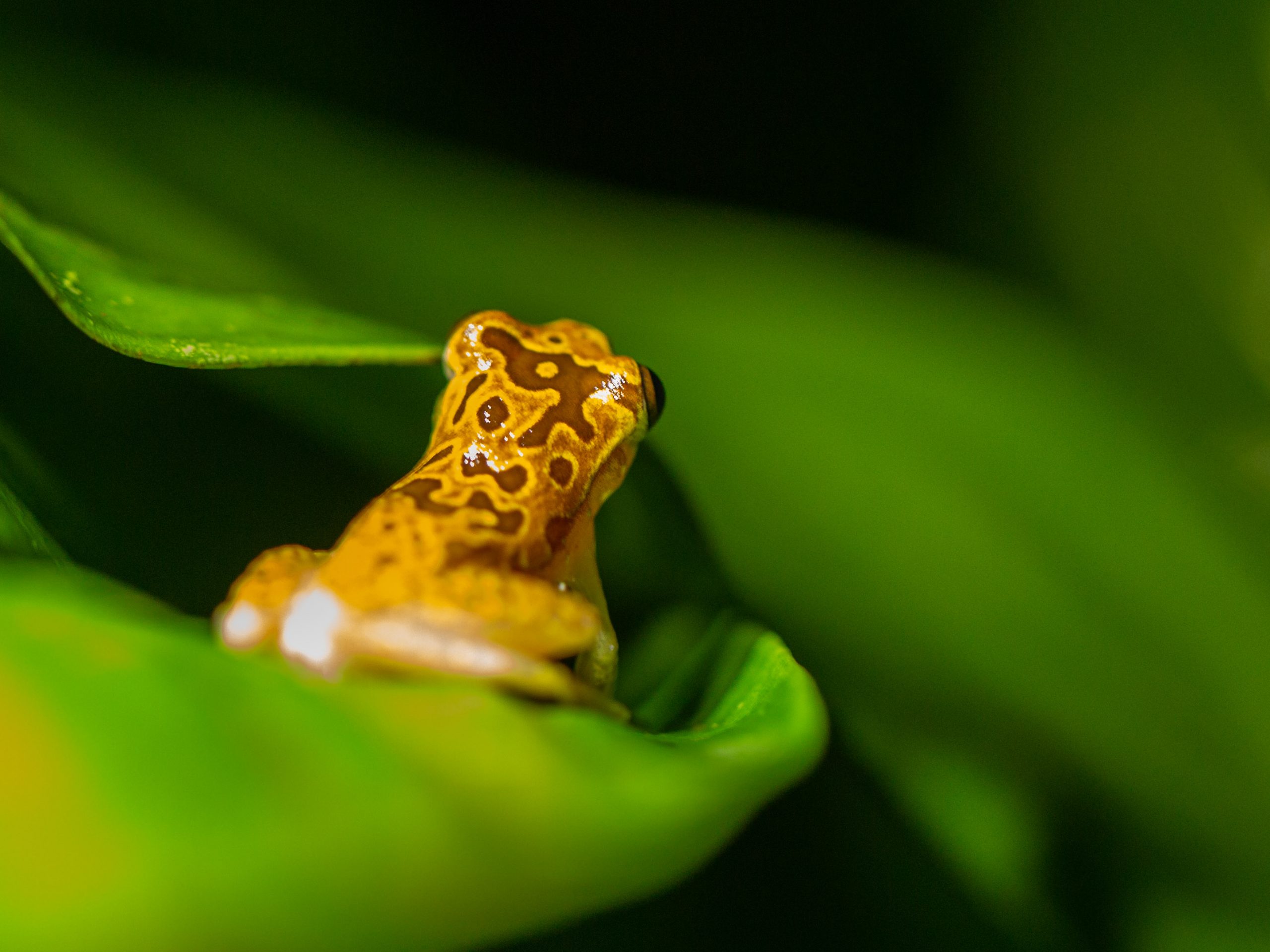 A new year down here in Jalova brings many new challenges, some of which are invigorating, some of which are incredibly frightening but all of them are exciting! For example, due to base being closed for nearly a month over Christmas time, every single bug and spider in a 100-mile radius decided to move into my bed. I guess it was free real estate. While this, for some reason, was lower down on the series of jobs we had to complete in order to make the base safe for our lovely new volunteers, I took it upon myself to safely assist these lovely visitors off the premises. Chivalry ain’t dead. 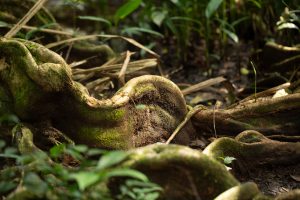 Once everyone had arrived things kicked off beautifully with a week of solid rain which, surprisingly, does not count as your daily shower. Please if everyone could wash that would be fantastic. However, the rain does bring with it many little nocturnal surprises of colour with their semi-permeable skin; frogs! These sensational little amphibians are what are known as explosive  breeders. This means they lie dormant during the drier parts of the year and then when the rains come it’s time to get down. Put the Barry White on, pour some glasses of Chianti and get that little lacey number out of the bottom draw for that one male who’s breeding colouration is all that. Damn boy.

Our volunteers have thoroughly enjoyed getting to know these lovely little splashes of colour, each species with their own personality. We have the ever-present Olive-snouted Treefrog (Scinax elaeochroa) males who go banana yellow as they all attempt to outdo each other. Not unlike how dogs will try to urinate on the same pole as other dogs, just higher up it, Olive-snouteds have to climb to the highest point to shout for amplexus (look it up). Then we have the unquestionably adorable San Carlos Treefrogs (Dendropsophus phlebodes) who have tiny little squished up faces and delightfully big eyes that would inspire anyone to work as hard as they can to preserve them. Then, arguably, the star of the show, the Boulenger’s Long-snouted Treefrog (Scinax boulengeri). They are theatrically ugly, with a flattened snout and an incredibly granular back as they aim to blend in with tree bark. The legend himself, Jay M. Savage (a man who wrote a herpetology book of biblical proportions and one can tell from his writing that he has a very impressive moustache), described this frog as having a “schnozz.” I can say no more, this is the highest praise imaginable.

Each and everyone of these beautiful species hammers home the importance and fragility of these ecosystems. If the rains were altered in any way, if they came too late, if there wasn’t enough or too much all of these species would drastically suffer. If the rains never came, all these frog species would face eradication. The canals and wetlands in and surrounding Tortuguero National Park are a Ramsar Designated Site meaning they are of international significance. Wetla 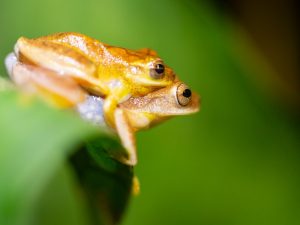 nds like these are an essential habitat in any food web, supporting a complex series of interactions and all of our volunteers who pass through here make a difference in preserving this cornerstone habitat. When anyone is out in the field it really drives home how sensationally beautiful our world can be and how being passive in its destruction is impressively pointless.

During turtle off-season our beach is eerily quiet and primarily just used for volleyball and bronzing. However, this means plenty of forest time for our lovely volunteers, who have all been fantastic. We have seen plenty of interesting characters in the forest recently such as beautiful forest birds like the Black-Throated Trogon (Trogon rufus) and the Song Wrens (Cyphorhinus phaeocephalus). I enjoy the Song Wrens because their calls sound like lazer guns and they would make a great prop in a game of charades where you had to act out War of the Worlds. We have also seen a couple of very large Fer-de-Lance, which is one of the most dangerous snakes we have here in the park. They are a member of the Viper family and are known to act aggressively when threatened but they are gorgeous creatures who must be shown a little bit of extra respect. One of the surveys went out, saw one that was over 2.5m in length and came straight back, as protocol dictates. Most would complain if their survey was cut short but no one was complaining when they came that close to an enormous danger noodle, it was actually incredibly exciting and I didn’t shut up about it all day. 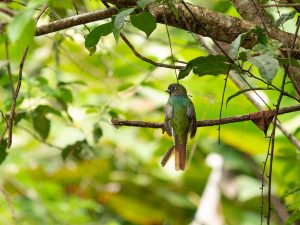 New year, new me? This may be the case with many people around the world but due to the fact that the animals we study here in Jalova have no concept of our arbitrary measurement of time I doubt they feel the same. They remain ever-present, at least temporarily.

Every morning, although sometimes far too early (3.45am-5.30am) I still have to pinch myself before realising that I am actually in such a beautiful place; surrounded by such unique wildlife, scenery and people.

We have seen some amazing wildlife; Olive Snouted Treefrogs (or as we now call them Olive snouted snee frogs – good one Meg!), lots of tanagers, crocodiles, a Jaguar, two Fer-de-lance and so much more.

Days on the beach have been great. We all go swimming in the sea, play ball games or have sand fights whilst enjoying the wonderful weather. Although we previously had a week of rain, which was not great as everything was soaked the whole time, since then the weather has been nice and hot. Anywhere between 28-34 degrees Celsius which, as long as it cools down in the evenings; is plenty hot enough.

We’ve been doing two main types of surveys; bird-boat and forest biodiversity. On the bird-boat we spend a few hours in our trusty stead – Porridge (it’s a canoe). Porridge helps us to travel around the canals of the National Park, surveying the birds that we see along the way. So far, we have seen lot of birds; Cattle, Snowy & Great Egrets, Green Herons, Northern Jacanas, Red-Lored Parrots and if we are really lucky Great Green Macaws. The forest biodiversity surveys run through the forests themselves looking for birds, mammals, amphibians and reptiles. Luckily, we have seen all three species of monkeys in our area: Central American Spider Monkeys (who are critically endangered), Mantled Howler Monkeys and White-throated Capuchins. The Capuchins sometimes like to visit base and be nosey as to what we’re doing. Some of the frogs we have found have been adorable, but there are also some funny ones including the Savages Thin-toed Frog who pays us no interest what so ever when we take a look or walk past.

Thursday, we started the day by doing a beach clean and collecting as much rubbish from the beach as we could in 1.5 hours. Considering the beach is in the middle of nowhere you would think there wouldn’t be a lot to collect. Unfortunately, there as a lot. We were able to collect 138kgs of waste; consisting of glass and plastic bottles, broken buckets, crates, half a fridge and more. Luckily Tortuguero has a great recycling system and recycles everything that we give them. It’s a shame to see such a beautiful beach have so much rubbish littering it; but at least for now we have helped some of the animals and turtles to nest with a reduced risk of hurting themselves from human rubbish.

For now, we are heading back to the jungle so more surveying, leadership building & ready to welcome some more now volunteers.