Interesting facts about Peru that you might not know 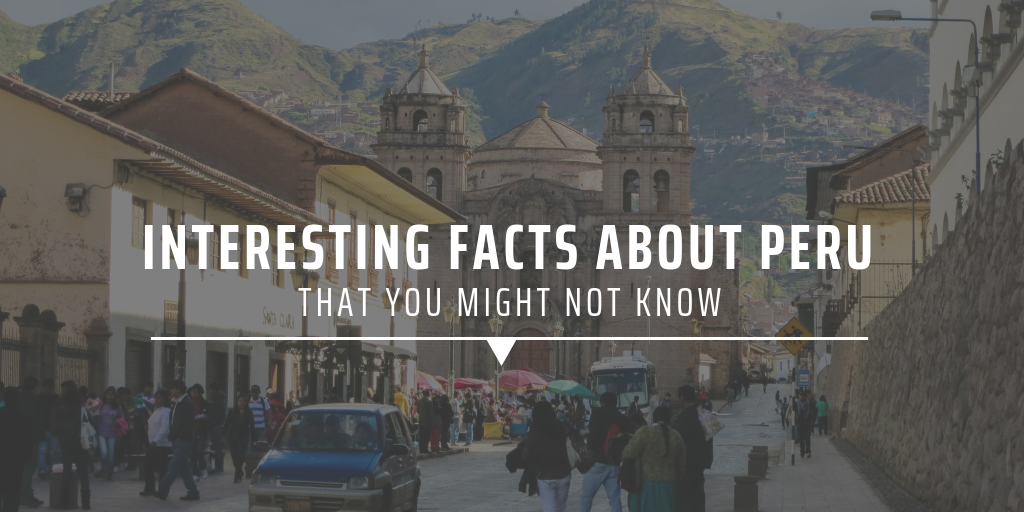 For travellers, Peru has long been a popular destination to explore. This might be to witness the majestic sight of Machu Picchu or the floating islands that some call home.

These are just some examples of the amazing places to see in Peru. This country is brimming with unusual cultural and historical facts for travellers to learn. To feed your imagination and tempt you to travel, GVI has listed its favourite fun facts about Peru.

Peru fact 1: The Amazon River starts its journey in Peru The Amazon basin is home to one of the most biologically diverse rainforests in the world. And the Amazon river, which is one of the longest rivers on record, runs through it.

The majority of this basin is in Brazil but it also spans across parts of Peru, Columbia, Ecuador and many other South American nations.

The starting point of the Amazon River has been a hotly debated topic for over 400 years, mostly due to its vast size and multiple water sources. In 2014 however, it was established that the source was actually the Mantaro River in Peru.

Peru fact 2: Peru is the origin of the Inca civilisation Peru is home to one of the New Seven Wonders of the World, Machu Picchu, which is located near the town of Cuzco. GVI has community programs in Cuzco that work towards making long-term impacts in areas such as teaching and women’s empowerment.

If you are aged between 15 and 17, you can even trek to Machu Picchu itself as part of our Peru under 18 volunteering program. Of course, trekking is open to anyone if they are feeling brave enough!

The purpose of Machu Picchu remained a mystery to settlers and scholars for over 100 years. Some believed it was an astronomical observatory, others thought that it was a royal estate. Most Incan historical sites were destroyed by the Spanish invasion of Peru, yet Machu Picchu remained hidden, and so it’s one of the best-preserved relics of the Inca civilisation.

Their roots can be found in Peru as early as the 13th century, with the civilisation rising to notable power about 200 years later.

Peru is well known for having one of the world highest lakes, Lake Titicaca, which is elevated at 3,810 metres. This lake is located near the town of Puno, Peru, but it also straddles the border of Bolivia.

On this lake, you can find floating islands made of thick totora reeds, where the Uro people still live. In times past, these artificial islands were covered in soil and were used to grow crops such as potatoes. Nowadays, the islands’ inhabitants are mainly trout fishers.

These islands are also a popular tourist attraction due to the Uro’s colourful traditional homes, which are made out of the same water reeds used to make the islands themselves.

Peru fact 4: It boasts the tallest sand dunes in the world Down the west coast of Peru, roughly three hours south of Lima, you can visit the Cerro Blanco sand dune, which is located in the Sechura Desert. This gargantuan sight is about 1,176 metres high, making it the tallest sand dune in the world

Not far from there you can find a town called Huacachina. This hidden gem is a desert oasis surrounded by expansive sand dunes.

Most people will visit this town for one reason only: sandboarding. Thrill seekers pay for a speedy ride in a jeep up steep inclines and into deep troughs of sand. You will stop at the tops of several sand dunes where you will have the chance to go sandboarding head first. It’s a must if you like to get your adrenaline pumping!

Guinea pig (cuy) is a traditional Peruvian dish. For some of us, the guinea pig is a cute, domesticated pet, rather than a favoured choice on the dinner menu. However, in Peru this little animal is a popular part of local cuisine, and has been since the time of the Incas centuries before. Cuy are usually cooked whole (yes, whole!), seasoned with garlic and salt to help make them nice and crispy.

Peru fact 6: Peru is home to most of the world’s alpacas Peru contains almost 90% of the world population of alpacas, with most of them living in the Andean regions. Alpaca herding is a traditional Peruvian trade that has occurred, once again, since the time of the Incas.

Alpaca wool is used to make clothing and household items like rugs and blankets, and is often in high demand. This is a lucrative source of income for many in this country.

After finding out such interesting facts about Peru, your curiosity has no doubt been piqued. But we have barely started learning about this amazing country! So, perhaps it is time to find out more for yourself!

Six reasons why teenage volunteering can be a great way to make friends
Read More
Environmental Education in Rural Schools in Cusco, Peru
Read More
What you need to know about applying to college after a gap year
Read More
Apply Now
Enquire Now
Call Back Request