1 888 653 6028   /   289 807 2400   Apply Now
Announcement
TRAVEL UPDATE: We're open! Where can I go? and answers to your questions about COVID-19
Megan
Colborne
Megan Colborne is a content writer from South Africa with a passion for travel and adventure. Megan has an honours-level degree in Journalism specialising in writing, editing and digital media from Rhodes University. Before pursuing writing full-time at GVI, she moved to Spain where she worked as an au pair and was able to pursue her love for travel – visiting places like Ireland, France, Amsterdam and Switzerland.
Limpopo Travel Volunteering Wildlife Conservation
0 Likes
Share
Facebook
LinkedIn
Twitter With rhino poaching on the decline for the fifth consecutive year, rather than slowing down on conservation efforts, we should continue wildlife conservation initiatives to maintain this upward trajectory.

On 3 February 2020, South Africa’s Department of Environment, Forestry and Fisheries reported that a total of 594 rhinos were poached in the country in 2019. This is a drop of 175 incidents since 2018. This illustrates the impact that can be achieved through wildlife conservation.

But what do we mean when we talk about “wildlife conservation”?

What is wildlife conservation? 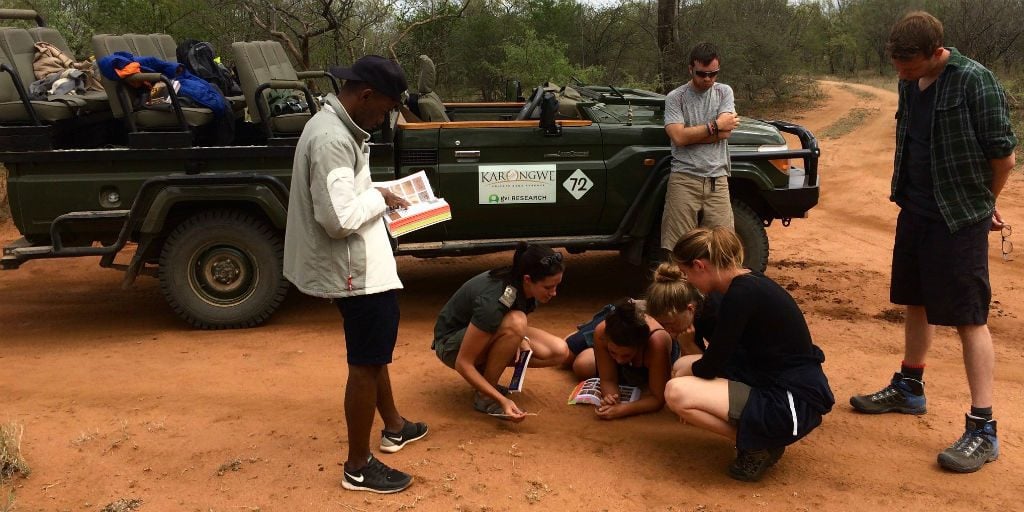 Wildlife conservation involves any activity where humans make a conscious effort to protect any plant or animal species and their habitats.

When we conserve our wildlife we’re making sure that generations to come will be able to witness and enjoy the incredible variety of species that currently call earth “home”.

To succeed in our efforts to protect and conserve wildlife, we need to understand how species interact within their ecosystems, and how they, in turn, are affected by human activity.

There are a variety of different wildlife conservation programs in South Africa. And while each program has different goals, ultimately they all aim to work towards the sustainability of South Africa’s diverse wildlife populations.

Check out five of these wildlife conservation volunteer opportunities offered by GVI. 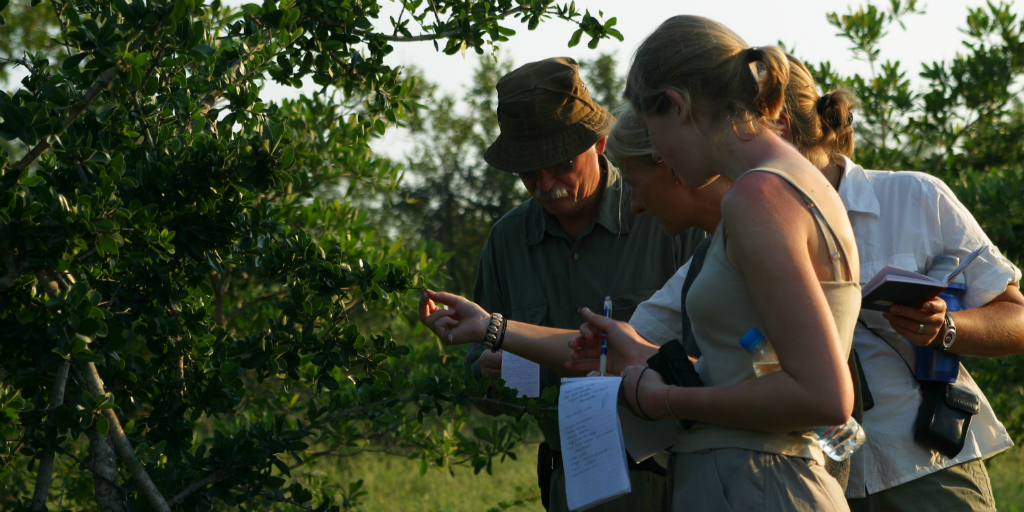 Play an active and meaningful role in the research and long term conservation of South Africa’s natural resources when you join this program.

On the wildlife research in South Africa expedition, you will learn how to track and identify predators such as lions and cheetahs, as well as the larger herbivores like elephants and rhinos.

The data you collect will be used by game reserve authorities and conservation organisations to develop a picture of the impact that predators have on their prey populations.

Other duties on this program include observing the movement, behaviour and social structure of specific species.

This information is important as it helps authorities to maintain a healthy balance of natural resources in reserves, enables conservation organisations to further their objectives, and ultimately assists with conserving many important species and habitats. 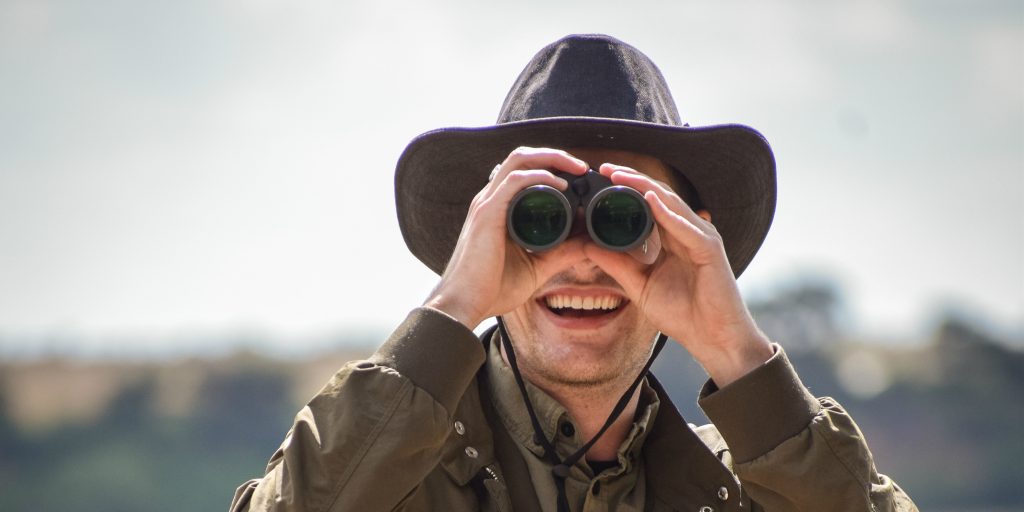 This internship will ensure you learn how to identify predators and master radio telemetry techniques to track and record animal movements. As a volunteer on this program, you will work in collaboration with an international research team in a private nature reserve just one hour away from Kruger National Park.

This internship is run in partnership with highly reputable local and international conservation organisations, like the South African National Parks authorities, Panthera, the Endangered Wildlife Trust and Elephants Alive.

An added bonus? This internship includes the Foundations in Sustainable Development online program and a certificate from the University of Richmond.. 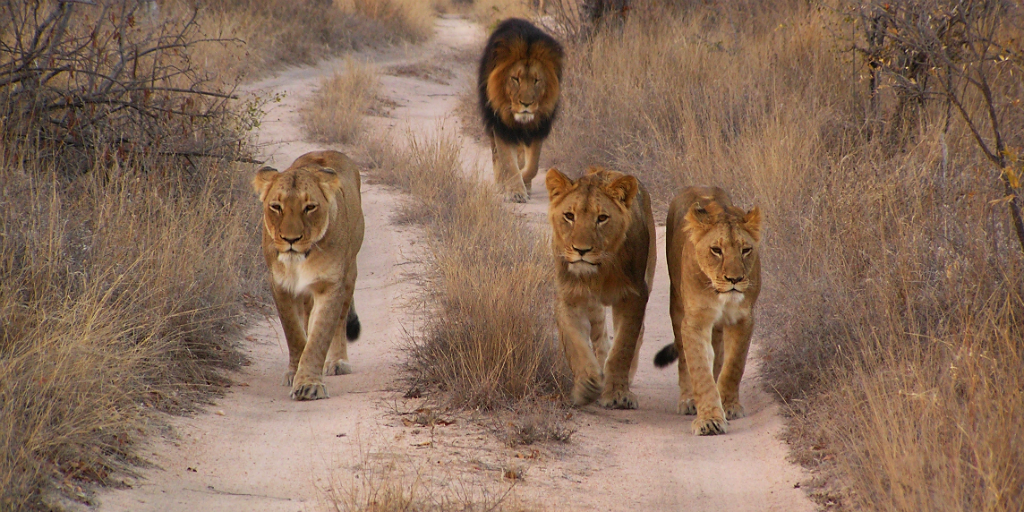 Join an international team of volunteers while you take part in big cat research in South Africa.

Here, you can learn how to use radio telemetry equipment to track leopards and lions across the savannah. You will be responsible for collecting important data recordings of their location, population numbers, sex, and behavioural patterns.

The information gathered is used by reserve authorities to track the day-to-day movements of big cats and help them make decisions about maintaining a healthy ecosystem within the protected area. Some data is also passed on to Panthera to assist with their global conservation efforts. 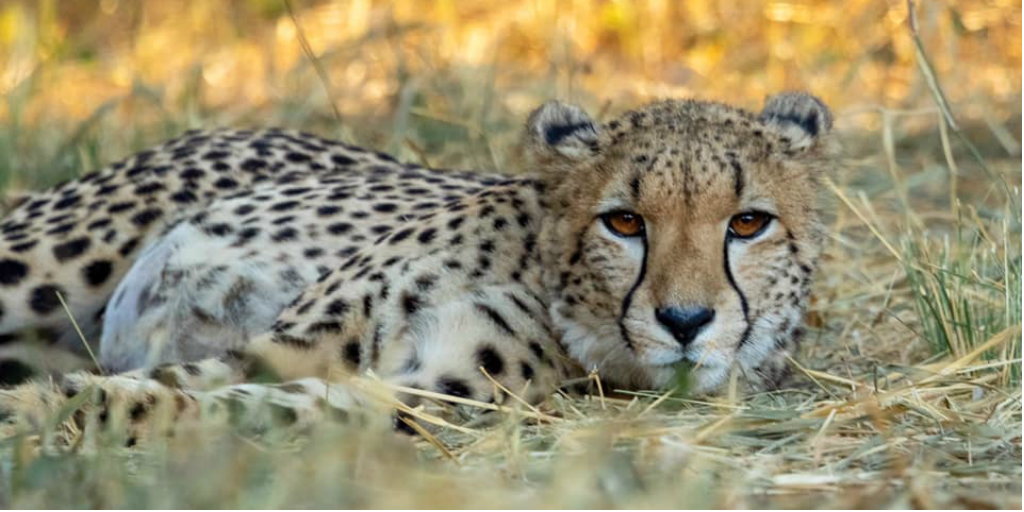 As a wildlife conservation volunteer on this project, you will contribute towards making an impact in the conservation of the vulnerable cheetah in South Africa.

The cheetah is classified as a near-threatened species on the International Union for Conservation of Nature (IUCN) Red List of Threatened Species.

Although cheetahs are subject to many of the same threats as other species, including habitat loss and poaching, they struggle to successfully compete with other savannah predators, like lions and hyenas. Cheetahs also have weak genetic diversity, which plays a role in the overall health of this species.

The main focus of your work as a wildlife conservation volunteer working in cheetah conservation is observing the cheetah’s behaviour. This includes their interaction with each other as well as with other predators in the reserve.

You will work with a group of researchers and participants from all over the world to track cheetahs through the savannah using telemetry equipment and safari vehicles.

Once you successfully spot a cheetah, you will track and record its feeding behaviour and set up camera traps to determine how much of the kill they consume, when they leave, and what exactly scares them off. 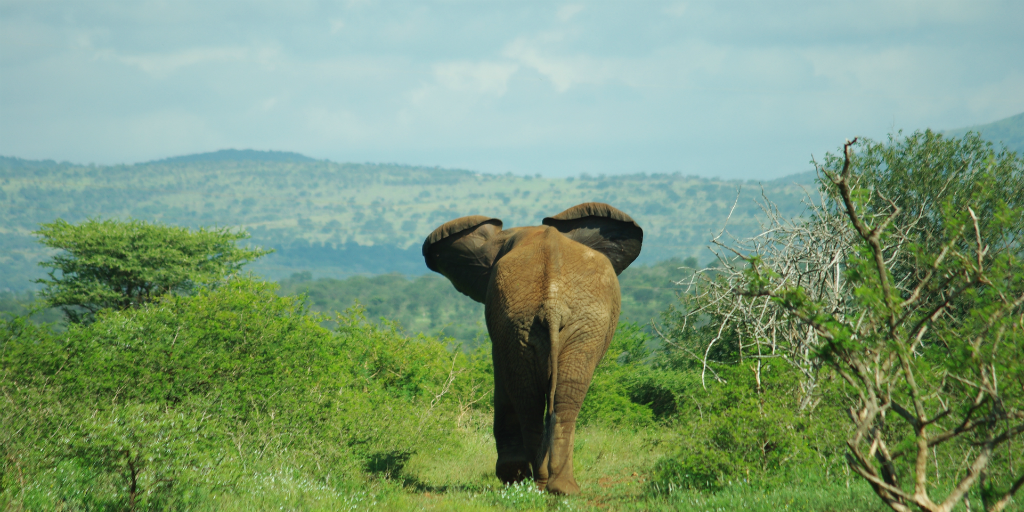 This program allows you to contribute directly to ongoing elephant research and conservation, in partnership with Elephant’s Alive, an organisation that has been involved in elephant conservation for over 20 years.

Elephants play an incredibly important role in their ecosystem. These giants ensure the distribution of plants throughout their habitat and are often able to uncover water sources in dry times.

However, elephants can also be destructive to a habitat if their populations are not well managed. Elephants will pull up the roots of plants to eat them.

During this wildlife conservation program, you will work with trained GVI researchers to track elephants through the bush in safari vehicles.  During these safari trips, you will be noting the number of individuals, their age and sex, as well as their behaviour and any identifying factors.

You could also contribute to an ongoing project by Elephants Alive. This project is focused on mitigating the impact of elephants on unique native plant species that are at risk, like the famous baobab, marula, and star chestnut trees, through observation and data collection.

The importance of wildlife conservation programs in South Africa 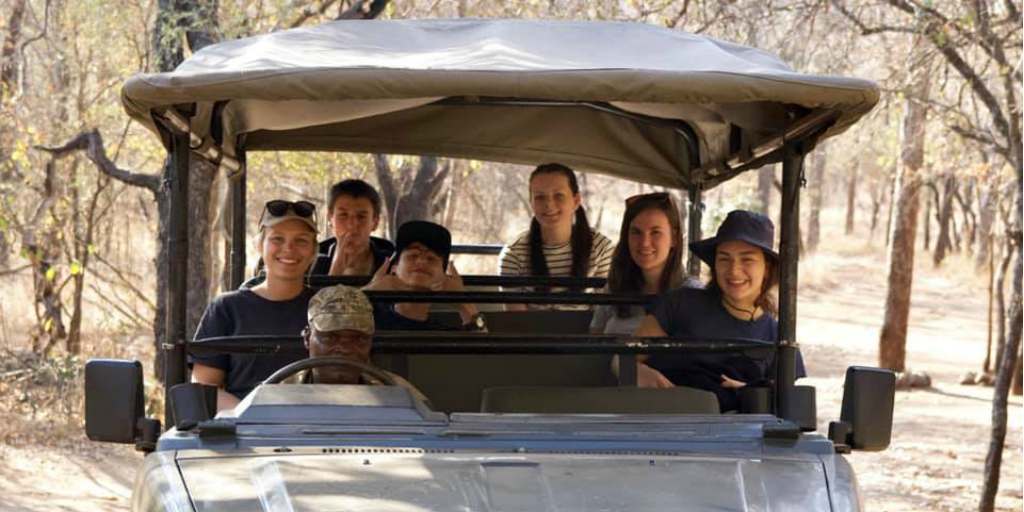 Tourism is one of South Africa’s largest sources of revenue. This is largely due to the fact that this country is home to more than 95 thousand species.

In fact, South Africa is home to 10% of the world’s plant species and 7% of its reptile, bird and mammal species, according to the Convention on Biological Diversity.

However, with the biodiversity of South Africa under threat, wildlife conservation is more important than ever. According to the National Red List assessments, 10% of South Africa’s birds and frogs, 20% of its mammals and 13% of its plants are vulnerable to extinction.

Because of this, it’s important to have a variety of wildlife conservation trips available for volunteers. This way volunteers are able to experience the issues at hand and raise awareness while making an impact in the efforts to lessen poaching and other harmful human activities.

Megan Colborne is a junior content writer for GVI, and an alum of the GVI Writing Academy. The Writing Academy is a skills-development program that pairs development editors with budding travel writers. Learn more about the program here. 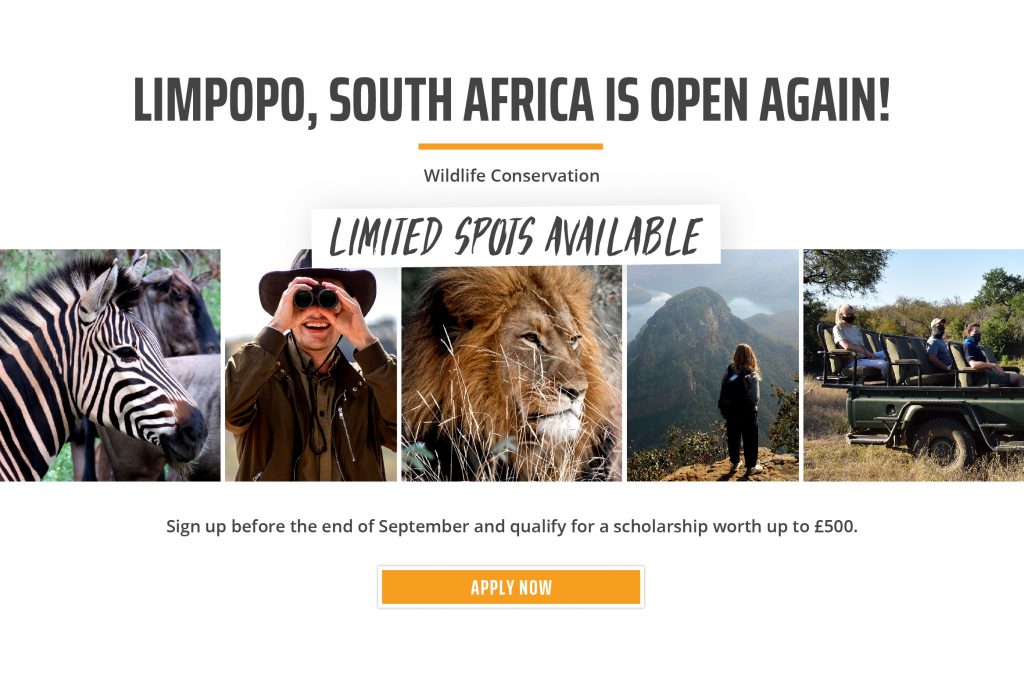