Empowering Women: One Momo at a time!

Who doesn’t love a momo? But what is a momo? Momos are either steamed or fried Nepalese dumplings with a variety of fillings such as vegetables, chicken, buffalo or even chocolate and fruit.

One fine afternoon, SASANE and GVI came together to form the ‘Great Momo Challenge’ as a way to fund-raise for SASANE’s school awareness program. The challenge was to make 500 momos in one hour. What a challenge it was! We even got to make chocolate and peanut butter momos. The most delicious invention you will ever taste. 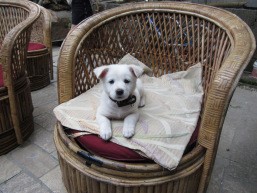 for the challenge, and in exchange we brought Nicky! —>

The day began with some chart making, e.g. a chart on ‘A guide to magical momos’ and a ‘Support SASANE’ chart. We then went to lunch with the GVI volunteers were we did not eat momos. After lunch we prepared a variety of delicious momo fillings. There were vegetable, banana chocolate, banana peanut butter and chocolate and peanut butter momos. We planned for GVI volunteers to make the vegetable momos while our skills were put to good use on the dessert momos. They are the most important momos of-course! Once all the preparations were, The Great Momo Challenge began! 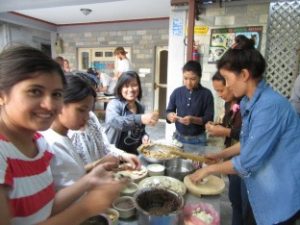 The challenge started off smoothly but furiously. Everyone was very into the momo making and suddenly BOOM! the famous and very handsome “Sushant Khatri”, with his Harry Potter Glasses appeared. The momo challenge had to come to a halt. But, after taking multiple photos with Sushant, the momo challenge resumed. Within 40 minutes we made 500 momos leaving 20 minutes for extra momo making. Simply because we were hungry; you can never have too many momos! The challenge then ended.

While the momos were cooking we were lucky enough to enjoy a dancing lesson with Sushant. Needless to say, the volunteers aren’t the greatest dancers, which was good for us because we were able to impress Sushant. After endless dancing we were hungry for some momos. Together, we ate our delicious momos with Allu’s Achhar. The day came to an end and we had to say goodbye to the volunteers. But what a challenge it was! 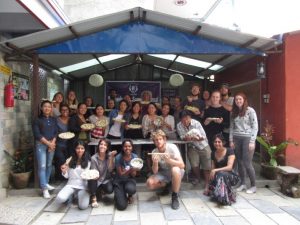