1 888 653 6028   /   289 807 2400   Apply Now
Announcement
TRAVEL UPDATE: We're open! Where can I go? and answers to your questions about COVID-19
Zaytoen
Domingo
Zaytoen Domingo is a content writer and editor based in Cape Town, South Africa. She is currently enrolled in the Masters program in English at the University of the Western Cape. After graduating with an Honours Degree in English and Creative Writing, Zaytoen completed a skills-development program for writers and became an alum of the GVI Writing Academy.
Sustainability Volunteering Wildlife Conservation
0 Likes
Share
Facebook
LinkedIn
Twitter

Contribute to Goal 15: Life on Land, by joining one of the best volunteer programs abroad 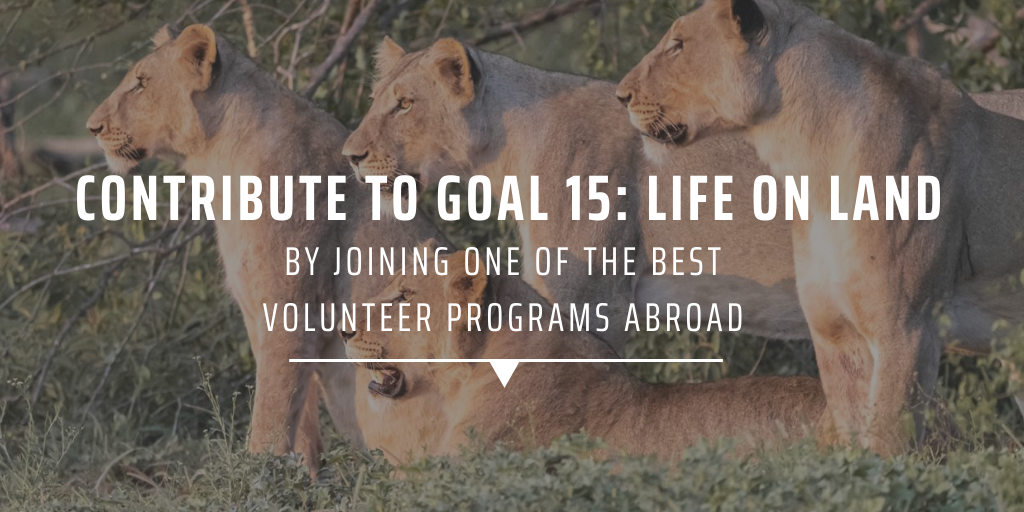 The best volunteer programs abroad are the ones aligned to the United Nations Sustainable Development Goals (UN SDGs). Seventeen goals are mapped out for each part of development that is important, with “Life on Land” listed as Goal 15.

The UN aims to achieve progress in sustainable development worldwide with these 17 goals. These goals focus on making a positive impact on all aspects of life. That’s why volunteer programs abroad that are aligned to the UN SDGs are the best – you get to be part of this impact.

The aim of Goal 15 is to look after and restore terrestrial ecosystems and biodiversity. This includes protecting forests, watching over the use of nature’s resources, and easing natural and human impact on nature.

Human and natural impact on nature include things like deforestation, desertification and land degradation. The UN has ten targets in place to reach Goal 15.

Let’s find out what they are and why they matter.

Freshwater and terrestrial ecosystems are things like mountains, forests, wetlands and drylands. Living things like plants and animals also form part of ecosystems.

Ecosystems can be impacted by natural disasters such as earthquakes, or human activities such as excessive hunting. When ecosystems are impacted, they change.

Sometimes these changes can impact the wildlife that inhabit these ecosystems. Too much negative impact on ecosystems is one of the reasons why populations of species start to decrease.

For example, a coral reef undergoes bleaching when bright coloured algae that live on the coral leave. This is a result of changes in the environment such as warming water.

Without the algae, corals lose their main food source and become more brittle and more susceptible to disease.

You can help to conserve wildlife in their natural habits, by becoming a volunteer on a wildlife conservation program. Did you know that forests cover 30% of the world’s surface? And trees do a lot more than produce the oxygen we need to breathe.

Trees contribute to 50% of plant production and consume 45% of carbon dioxide. This all means that trees are a very important part of every ecosystem.

Trees even control the force of the wind and the movement of water, protecting the land from natural disasters like floods.

Many species of living organisms live in trees, like insects, birds and mammals like monkeys. Did you know that 80% of plants and animals are found in forests?

Imagine that – out of all the places in the world, forests are the best places for most animals to live. That means quite a large part of living elements in nature depend on forests for survival.

Imagine a world without forests? Where would all the animals that live in them go? Goal 15 aims to alleviate deforestation by increasing afforestation and reforestation. Six thousand years ago, an enormous rainforest spanned across 11 countries in Northern Africa. Leaves dripped with crystal-like raindrops from the abundance of rainfall.

Today, this area is one of the driest places on Earth – the Sahara Desert.

Desertification is caused by degraded land from natural disasters like droughts. Humans also play a part in land degradation by clearing large areas of vegetation for buildings.

Alleviating desertification by managing water resources, for example, can restore the land. This means that the soil can become fertile again.

Mountains make up a quarter of the world’s surface and provide shelter for 12% of the world’s population. They also produce between 60% and 90% of our freshwater.

Clean drinking water is essential for humans and animals to survive, which means mountains contribute to sustaining ecosystems and biodiversity. Freshwater is also used for irrigation, which contributes to food production.

Who would’ve thought that these giant stone mounds were so important?

5) Protect natural habitats and decrease the loss of biodiversity

For example, Pandas in China depend almost entirely on the bamboo from the bamboo forests they live in. They eat bamboo almost all day and then they cuddle up to bamboo for a two to four hour nap. Natural habitats can be destroyed by disasters such as the massive bushfires in Australia. This disaster occurred due to high temperatures and land degradation from drought.

Droughts cause the land to become very dry, and climate change increases the temperature. Together, this increases the potential for wildfires. When habitats are destroyed, the plants and animals that inhabit them are also affected.

Reducing land degradation means that natural habitats can be protected and so can the species that live in them. This will also help to prevent the extinction of species.

Genetic resources are genetically modified crops created to alleviate and prevent food insecurity caused by a lack of natural resources. Natural resources such as food plants are becoming scarce due to the negative impact things like overconsumption have on the environment.

Access to genetic resources can increase food security and income, especially in rural areas where people and animals depend on natural resources.

Genetic resources will also prevent the loss of species of useful crops, by providing people with alternative resources. This means that natural resources like crops won’t be over harvested and can be preserved.

7) Protect species from poaching and trafficking

Animals are poached for their body parts, such as ivory tusks from elephants. Selling animal parts is a common form of illegal trade on the black market.

Wild animals are also trafficked to be sold as exotic pets. Poaching and trafficking have a large impact on the survival rates of these animals and on the decline of species.

Poaching and trafficking can sometimes be prevented by raising awareness about the survival of wild animals. Raising awareness will encourage global support and efforts to protect species from illegal poaching. Invasive alien species include plants, animals and other living things that are not indigenous to an ecosystem. They have an impact on indigenous plants and animals.

For example, the gray squirrel, innocently sharing peanuts with Britain’s native red squirrels, is actually a carrier of squirrel pox. As the carrier, it is immune to the disease, but for the red squirrel, this disease may be fatal.

A 2020 goal listed by the UN is to prevent and reduce the impact of invasive alien species on indigenous life.

9) Encourage government to be environmentally conscious

Environmental concerns should be part of a government’s developmental strategies.

The UN hopes to encourage governments to be environmentally conscious when creating national development plans by 2020.

People across the world have also taken strides towards raising awareness about the environment. Have you heard about the student strikes for climate change awareness that took place around the world, in 2019?

10) Increase financial resources for the conservation of ecosystems

Increasing financial resources, such as donations, will make more money available for looking after forests and other natural resources.

Financial assistance can also be given to communities to assist them with the necessary tools for conservation.

An even better way to assist is to go beyond donations. For example, you can volunteer on a marine conservation program in Seychelles and assist with environmental education sessions with the local community to raise awareness about environmental conservation.

How else can I assist with Goal 15?

There are many ways that you can contribute towards reaching these targets and fulfilling Goal 15. You can join a volunteer program abroad.

As a volunteer with GVI, you can help to increase the impact the organisation has already made so far. In a 2016 monthly achievement report, GVI had 496 participants who completed successful survey training.

Surveys collect valuable data that helps researchers to study ecosystems and how to preserve them. GVI also managed to raise up to £5,080.42 for anti-poaching initiatives.