This past month has been very eventful, and I shall try to do my best to spin you all the yarn of the adventures we’ve had! In the first week we had a big intake of new volunteers and interns, so they have been busy getting on with training week. During training week, new volunteers are taught about all the different types of surveys that occur in Jalova. These include canal birds; distinguishing the cattle egrets from the snowy egrets, biodiversity; which includes some lovely frogs, snakes and lizards, jaguar project training; including how to recognise individuals in our resident jaguar population and how to check our camera traps for lovely jaguars. Finally, Turtle Project training; which features things like recognising all the different species of turtle we get in Tortuguero and how and what to record when you find a nesting turtle on night walk! Overall, the new volunteers are enjoying it, although it can be a lot of information for one week, they are diving in head first and getting involved which is all we ask for in Jalova.

In terms of wildlife spotted around here is where the eventful stuff really kicks off. The last couple weeks have been heavily water-logged, with downpours nearing a daily occurrence. This is lovely when you are tucked up nice and warm in bed listening to the rain hitting the roof, less nice when the heavens open in the middle of survey! However, the rain brings many forest gems out with it and fully floods the canals which leads to some of the more secretive species coming out for ganders during the day. A couple of days ago I took the new volunteers on their first incidental bird boat on the canals and we had a lovely little paddle down the incredibly flooded canal. We saw some cute howler monkeys and spider monkeys, but things were only getting started. In one tree we saw an Osprey, a Peregrine Falcon and a Laughing Falcon, all just sitting there! I’ll be honest I did yell, but only out of pure excitement. If I was able to buy a lottery ticket that day, I would be writing this from my own jacuzzi in a tree house (which is what I would buy if I won).

Things definitely didn’t stop there with incredible things seen this month. Our new Turtle Project Leader, Lucie, who has just come back from her training with our sea turtle partner the STC (Sea Turtle Conservancy) in Tortuguero and the luxury they have there (unlimited cookies), saw and worked a Hawksbill Sea Turtle on our very own beach! They are one of the most endangered sea turtles thus it is incredibly rare to see one, let alone measure and count her eggs! This is a privilege that can be enjoyed almost nowhere else in the world. To top it all off they have beautifully ornate shells which glimmer and shine with a medley of colours, making Lucie and Emma very lucky that they saw it.

I thought I would start a new section in these blogs called Crabby Encounters (the name is a WIP), where I document all the jungle crabs we get around base! In the jungle surrounding us, there are many of these forest dwelling crabs who live in holes under the ground and come out at night to cause mischief. I thought I would dedicate a section to them because they never fail to make me laugh and all I can think about when I see them is how unbelievably inconvenient it would be to only be able to move side-ways. This week, Craig the Crab moved into the staff shower and decided to make it rain. But instead of throwing Benjamin’s, Craig decided to make it rain using everyone’s soaps and shampoos. In the photo you can see him skulking in the corner, feeling suitably guilty after I told him off. 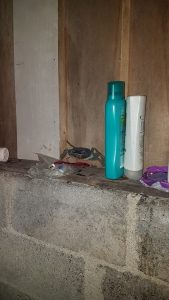 This is Craig the Crab, feeling suitably guilty 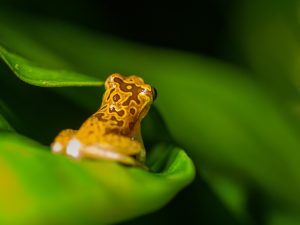 An Hourglass Treefrog, explosive breeders when the rains come 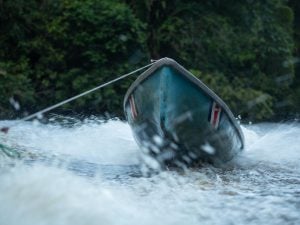 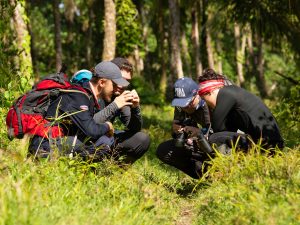 Staff and Volunteer alike are amazed by grass. Candid

Welcome to the Jungle: My first week as a conservation Intern
Read More
Three types of conservation internships and where you could travel to to get involved
Read More
Take an adult gap year with these seven volunteering projects for the mature traveller
Read More
Apply Now
Enquire Now
Call Back Request