On the 7th January 1979, Vietnamese troops entered Phnom Penh and brought an end to the Khmer Rouge regime that had run the country into the ground for four years. In this blog, I will give a brief introduction to the Khmer Rouge before giving an insight into Cambodia today, commenting on how memories and scars of the genocide continue to affect the country. 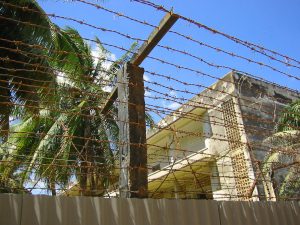 Based on a convoluted and muddled understanding of Marxist texts, Pol Pot and his Khmer Rouge cadre brought chaos and suffering to Cambodia. The ideology broadly suggested that technology, urban life and education were the tools of the elite and as such the evils that prevented a utopian society. Pol Pot and the Khmer Rouge envisioned a Cambodia returned to the soil – a purely agrarian society rid of technology and education.

After seizing control in 1975, the Khmer Rouge immediately went about implementing their haphazard theories. Phnom Penh and other major urban centres were evacuated as city dwellers were told to leave their homes immediately and head for the countryside. Many believed they would return shortly and cleaned their homes for their return. Once they were out of the city, citizens across Cambodia were told that they were to begin farming the land – every square kilometre in Cambodia was given the same quota to meet, irrespective of the conditions of the ground. On top of this challenge, urban Cambodians were not given any instruction on how to farm, and the regime had banned the use of anything more than primitive farming tools.

Over the next four years mass starvation ensued and it is estimated that between 1.4 million and 2.2 million people were either killed or died of starvation and/or exhaustion. In addition to the suffering of the entire population, specific minority groups such as the Cham and Vietnamese communities were further targeted as enemies of Khmer nationalism. Enemies of the regimes utopian vision were also sought out. This would include anyone who had clear signs of education – including the ability to speak a foreign language or the use of spectacles. By 1979, 75-85% of teachers had fled or been killed whilst only 20 doctors remained in country.

These supposed enemies of the regime were often taken to Khmer Rouge prisons such as S21 in Phnom Penh. Here innocent people were tortured into producing reports of their treachery and ties to organisations such as the CIA and KGB. Once a confession was signed they would be summarily killed and left in mass graves.

Reading about the Khmer Rouge can leave a bystander shocked by the capacity of humans to treat one another in such a way. In Cambodia, 40 years on, it is still an often avoided subject.

Memory of the Khmer Rouge: Survivors

Sitting inside the grounds of S21, (the primary location for research and education about the Khmer Rouge), you can have your photo taken with survivors of the prison when you buy a signed account of their experience.

This situation is likely to arouse emotion and questions in any observer:

‘Isn’t it sad that the rest of their lives is reliving their tragedy and taking photos with tourists?’

‘How do survivors continue to work in the very grounds where these crimes were committed against them?’

These questions and many more immediately begin to form. There is a lot to unpack.

Perhaps it is worth recognising the positives of this reality. Survivors’ accounts are a vital part of any understanding of genocide. Once no more survivors of a crime against humanity exist, it often becomes desensitised and ascribed to history. As such, it is incredibly important that humanity learns from survivors of its worst crimes, to create systems and education to prevent repetition of such actions.

However there is an uncomfortable reality in what survivors at S21 expect visitors will want from them. Photos with survivors. It’s not quite the same as meeting a celebrity. Unless tourists speak Khmer (which they almost always don’t) it is unlikely that a visitor will be capable of building up such a rapport with a survivor that they would like a photo to remember their discussions and interaction. The photo is far more of a product – you can buy their book and they’ll throw in a photo to sweeten the deal. In this regard, the survivors have become an additional exhibit.

I urge visitors to consider how their actions influence the place, people, and history they are attempting to understand more about. 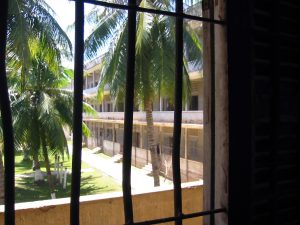 So 40 years have passed and what’s happened since to reconcile present and past?

A common phrase that is used to describe Cambodia since the Khmer Rouge is ‘war weary’ and it is understood that many people want to forget the turmoil of the past and carry on their daily lives without concern for concepts of retribution or justice.

However, 40 years is a long time and several generations of Cambodians have grown up hearing of, but not experiencing, this past. As such there is often a significant cultural gap between younger and older Cambodians, as well as urban and rural communities.

For many years, calls for justice and the trials of the perpetrators of the violence have emanated from the international community and some sectors of Cambodian society. However, until November 2018 only three people had been convicted for the crimes committed by the Khmer rouge. Many reasons for this lack of justice were given, often citing that Cambodians did not want to bring up the past, and leave it firmly behind them. Other reasons are well worth a google. Nevertheless, in November 2018 Pol Pot’s second-in-command and head of state were each found guilty, representing a significant milestone towards justice.

Perhaps as time had passed and the proportion of Cambodians attempting to forget the horrors they witnessed decreases we will begin to see a resurgence of individuals seeking justice for Cambodia – be that posthumously. 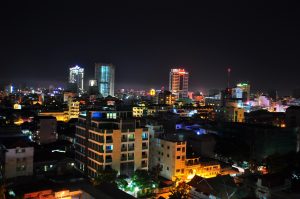 The evacuated capital has grown since 1979

I hope readers who have made it this far have found this blog insightful about the Khmer Rouge and what has happened since.

As a final note I’d like to emphasise how memory is never finalised – the Khmer Rouge, just like many of humanities bleakest moments is over, but how society remembers these events fluctuates and permeates forever. Public memory is eternal and how we act and learn from the past will always fashion how we move and grow over time.

Take an adult gap year with these seven volunteering projects for the mature traveller
Read More
Why do so many people visit Angkor Wat? And why should you join them?
Read More
Sixteen awesome summer volunteer programs for 2021
Read More
Apply Now
Enquire Now
Call Back Request