The importance of seagrass: Why we should conserve this marine habitat 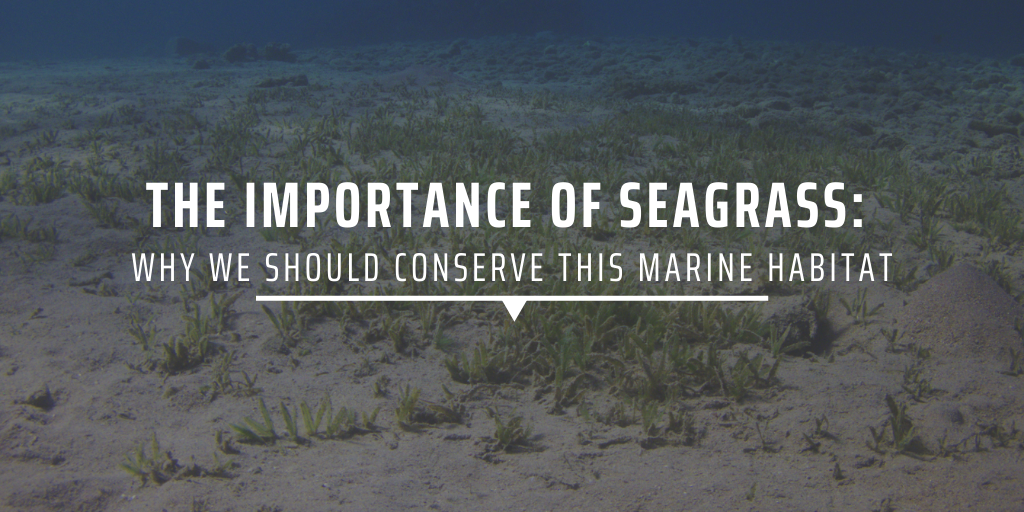 Original photo: “Sea grass bed” by Tim Sheerman-Chase is licensed under CC BY 2.0

Seagrass meadows are perhaps the most under-appreciated marine habitats, often ignored by divers and snorkelers who swim straight past them. But little do they know that seagrass is important to marine life and humans alike.

Let’s dive in to take a closer look at the importance of seagrass.

Most people assume seagrass is just grass that grows in the ocean, but

it’s not really grass – its closest terrestrial relatives are lilies and orchids. Seagrass is named after its long, narrow leaves, which bear a resemblance to terrestrial grasses.

Found in shallow seas and brackish waters throughout the world, seagrasses are flowering plants that have evolved to thrive where few other plants could survive. There are approximately 72 species of seagrasses, and they can be found in tropical, temperate, and even arctic waters. 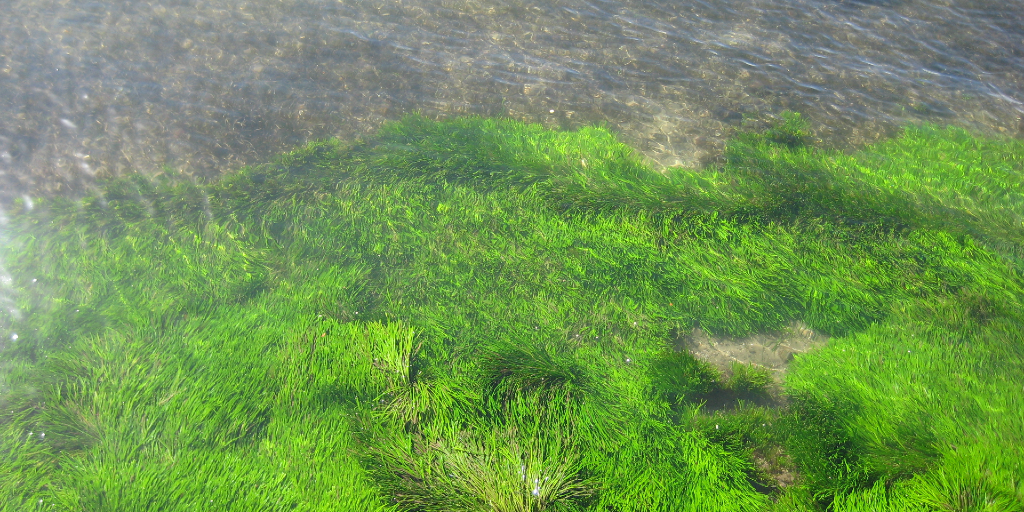 Original photo: “Sea grass” by angusf is licensed under CC BY 2.0

Like most plants, seagrasses have roots that burrow into the sand or mud for nutrients and anchorage. The latter is especially important, considering the strong currents they may have to endure daily.

Modified parts of seagrass stems, known as rhizomes, assist in stabilising the seagrass while also playing a key role in reproduction.

Many plants are capable of asexual reproduction (where an offspring arises from a single organism), but seagrasses take it to a whole new level.

Seagrass can clone itself via a process known as rhizome extension, where the rhizomes spread across the ocean floor with new shoots appearing above the sediment. By reproducing in this way, seagrass can cover vast areas of shallow seas. These expansive areas of seagrass are known as seagrass meadows. Some of these seagrass meadows are so large they can be seen from space.

Why is seagrass important? 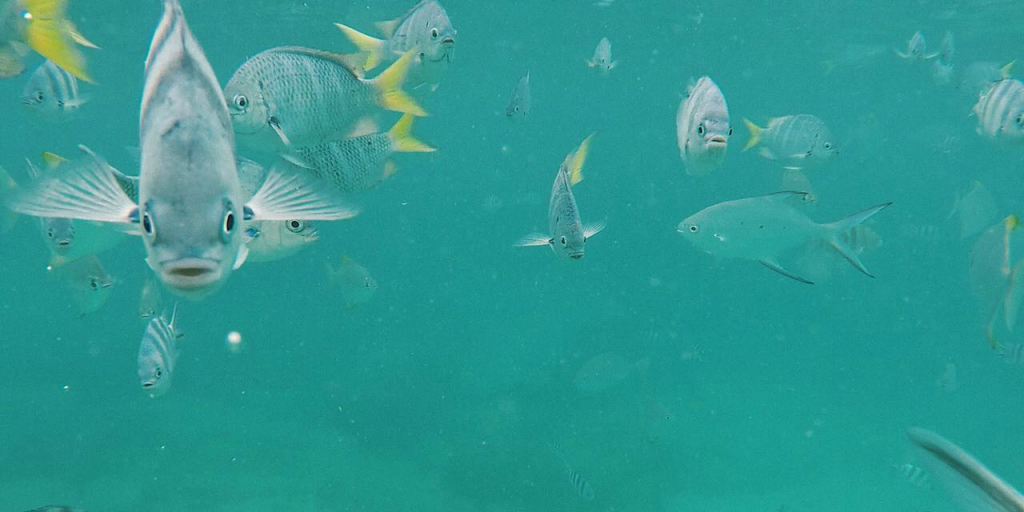 The meadows form over soft sediment, and their rhizomes weave together under the seabed, stabilising the sand or mud they grow in. This prevents the seabed from getting washed away in currents and potentially smothering neighbouring coral reefs.

Seagrass meadows are often referred to as nursery habitats because their dense layers of leaves slow the flow of water, and provide a safe shelter for juvenile fish, as well as some smaller species of fish and invertebrates.

Many fish are attracted to seagrass meadows to feed – either on the smaller animals that are hiding there, or on the seagrass itself.

The world’s only true herbivorous sea mammal, the dugong, lives almost exclusively on a diet of seagrass, with an adult dugong eating up to 40 kilograms of seagrass a day. The green turtle is also herbivorous (as an adult), and seagrass makes up a large part of its diet – an adult can eat around two kilograms a day. 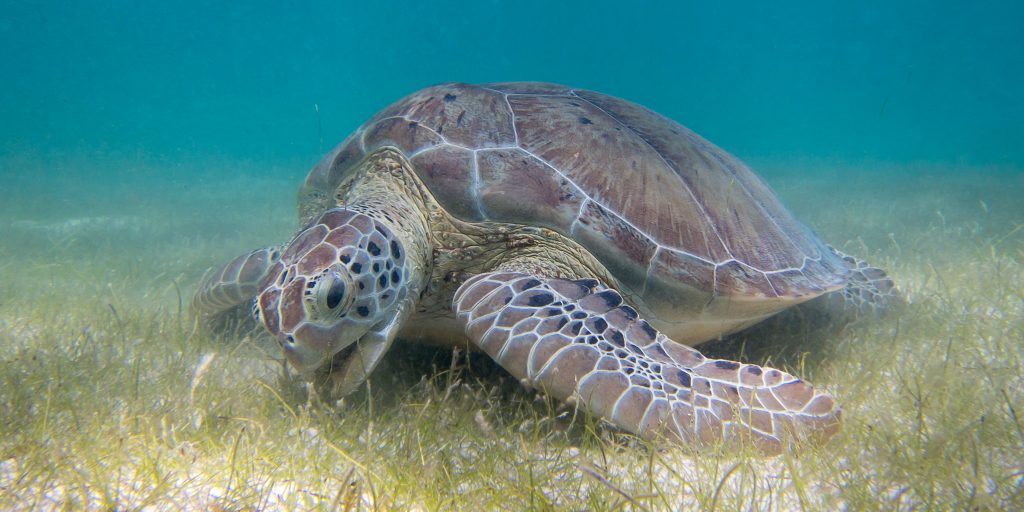 Blue carbon is the term used to describe carbon that is trapped and stored either in the ocean or in closely related marine ecosystems, such as mangroves or salt marshes.

Since they are plants, seagrasses photosynthesise in the same way terrestrial plants do. They use sunlight to synthesise nutrients from carbon dioxide and water, releasing oxygen as a by-product. 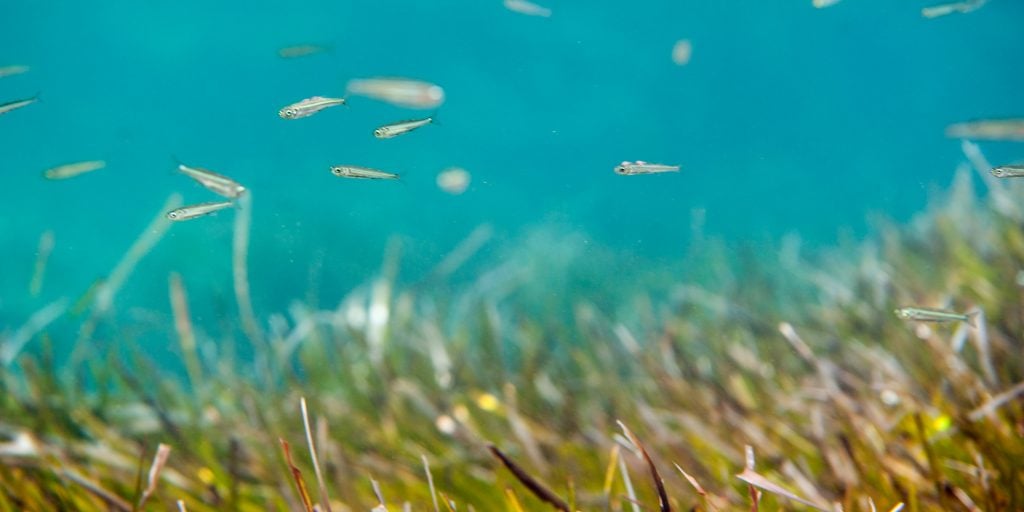 Original photo: “Sea grass” by jayhem is licensed under CC BY 2.0

Seagrasses are aptly nicknamed “the lungs of the sea” because they can generate enormous amounts of oxygen. A single square metre of seagrass can release as much as ten litres of oxygen a day, through photosynthesis. When snorkelling or diving over a seagrass meadow, you can actually see the oxygen being released from the seagrass as it floats up to the surface!

Seagrass can also absorb huge amounts of carbon from the atmosphere, which means it plays an immensely important role in curbing climate change.

Each square metre of seagrass is capable of absorbing 83 grams of carbon per year, and seagrass meadows hold around 10% of the carbon stored in the ocean. This number is particularly impressive considering they make up only 0.2% of the ocean floor.

The carbon is stored in the plant, and as the plant dies, the leaves sink to the seabed and decay. The carbon trapped inside the leaves and rhizomes of the seagrass will become buried by sediment, and trapped indefinitely — that is unless the seagrass meadow is interfered with. 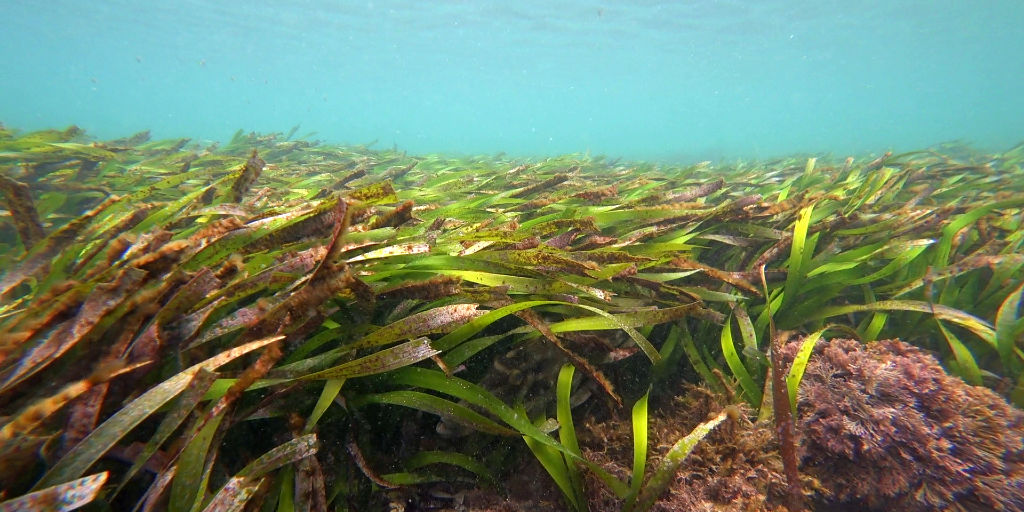 Original photo: “Fish hiding in sea grass” by andrewharvey4 is licensed under CC BY 2.0

Seagrass meadows are under threat

Although seagrass meadows are rapidly declining, seagrass is one of the most resilient plants on the planet.

Depending on their location, seagrass meadows may have to endure changing levels of salinity, extreme temperature fluctuations, waves and storms, and strong currents. Some species that grow in very shallow water may have to deal with moving between water and air up to twice a day (as the tide moves in and out). Very few other plants could survive such harsh conditions.

Along with mangroves , seagrass meadows have become a vulnerable shallow-water habitat. 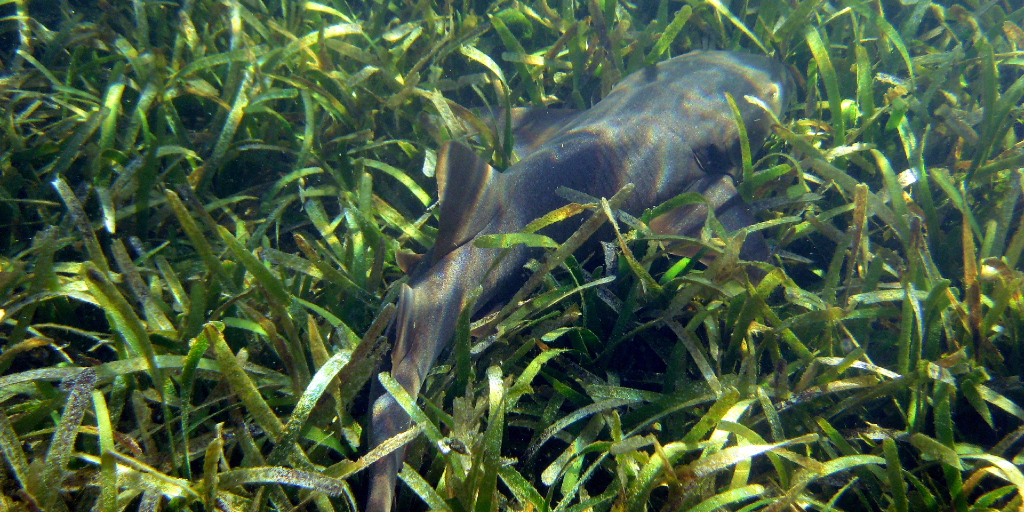 Original photo: “reef2739” by NOAA Photo Library is licensed under CC BY 2.0

Their biggest threats are pollution from agriculture and habitat destruction.

Rain over farmlands can wash fertilisers into rivers and the ocean. This increase in nutrients can cause algal blooms that could block the sunlight that is necessary for seagrass to photosynthesise.

Seagrass meadows are often removed by hotels and resorts who believe their guests would rather have a white sandy seabed than a green (often slimy) meadow. Completely removing the seagrass can have devastating effects on neighbouring coral reefs, local fisheries, and even the shape of the seabed.

Unsustainable boating practices can also have negative consequences on seagrass meadows. Boats dropping their anchors on seagrass or sailing over too-shallow water can affect large areas of seagrass beds, damaging the leaves and rhizomes and slowing further growth.

The significance of seagrass meadows is poorly understood on a global level.

If you’re interested in learning more about these marine ecosystems and contributing to their conservation, why not join one of our marine conservation programs?