Return of the Baby Tortoise On an island far, far away, there was a baby tortoise. Her name was Vala. She woke up and didn’t know where she was. She was cold and scared and wanted her mama. She wandered along through some grass for a bit and suddenly there was a skink in front of her. Vala was scared because she had never seen anything like it, but the skink introduced itself as Skuli the Skink. Vala soon realized that he was friendly and Skuli even offered to show Vala where she would be safe and taken care of. He told her that there are some nice creatures, called humans, that take care of tortoises and make sure they grow up nice and fat. This place is called The Tortoise Sanctuary and Spa (we humans know it as the Ranger’s Station). Vala was filled with joy and couldn’t wait to see these so called humans. Skuli had to warn her though, the path to safety was long and rough and they would face many dangers along the way.

So the journey began. Vala and Skuli went on side by side, determined as ever. Since tortoises aren’t the fastest creatures, their pace wasn’t that great (but slow and steady wins the race, right). When they had travelled for one and a half days, they had their first mishap. Vala fell into a hole. Skuli was a fast thinker though and had quite the experience. He quickly threw his tail down the hole and told Vala to grab on with her mouth, even though he knew it would be painful because tortoises have pretty strong jaws. With Skuli’s help, Vala managed to crawl out of the hole and on they went.

After three days of walking through grass, sand and Coco de Mer trees they could finally see the sanctuary. Vala couldn’t help herself and started running towards it, but Skuli tried to stop her because he knew the worst peril of them all lay ahead. But Vala went on, and out of nowhere came a huge, fat gecko. Vala had to do her best to not run into this green creature but she managed to stop and she asked him if he would move out of the way so she could get to the sanctuary. Then Skuli came hurrying and out of breath and told her to turn back and don’t listen to anything this gecko says. Then the gecko bellowed “If you want to get past me, you have to bow to me and pay taxes!”. Vala was startled by the behavior of this gecko but she had become experienced on her long journey and knew what to do. She got up close, with no fear in her eyes she started scratching the gecko’s neck and stomach. The gecko soon lay on the ground, helpless and satisfied. Skuli was amazed by these sudden turn of events and Vala’s courage. As the gecko lay there, they could sneak through and they had finally arrived to The Tortoise Sanctuary and Spa.

Vala was so happy and relieved, she even got happy tears in her eyes. Skuli was really happy for her and for a moment they just sat there and enjoyed their triumph. Soon a human came along and picked Vala up. Skuli and Vala had to say their farewells but Skuli said he could always come and visit, which made this a lot easier for Vala. The human put her on a nice field with enough food and a bunch of other baby tortoises. She made a lot of new friends and couldn’t be happier. Everything about this place was as she had imagined, except one. That was when volunteers from GVI came along. They scanned, held and even gave them a bit of a makeover. That was definitely the best time she had ever had in her life. She even peed herself a little bit when one of the volunteers was holding her. 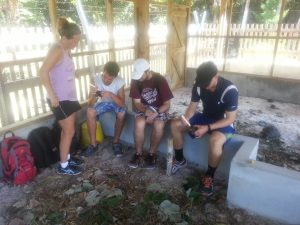 The Sanctuary was her home now and she grew nice and big there. It was pretty much Skuli’s home too because he loved spending time with the baby tortoises. There they lived happily ever after.