This blog post prompt asks me to write about an experience I have had since being on the project. How fascinating to ask for one single experience when the entire project has been an immersive experience worth writing about. I must say one of the most jarring moments of my experience here so far has been going to the school and having all of the little 1st grade kids running around talking in Pakinyaw. The shocking part was not the kids running around like crazy but more that the kids could not understand a word I was saying in English nor did they have any desire to figure out what I was trying to say. I stood there for a minute taking in the chaos, trying to figure out how to handle the situation. 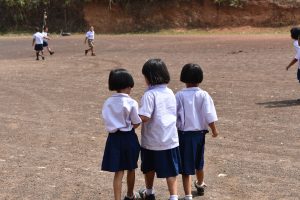 Liane came to the rescue and got them to settle down enough for everyone to form a circle. Once we were all in a circle I asked for their names in English. The kids started shouting out their unique names and I could not make out a single one of them. They could have been telling me their name was “Chicken Butt” and I would not have been able to say anything other than “Se Menoh!”. I attempted to keep the circle formation and shouted various classroom commands the kids were supposed to already be learning but slowly I lost their attention. I finally managed to grasp the kid’s attention with some goofy faces and changing voice inflections just as we were transitioning to the next learning activity.

This experience, while a bit stressful at first, helped me realize even more the universal language we all share of voice and of body language. Of course, it also made me realize that I need to try to learn more of the Pakinyaw language so the kids don’t find themselves being called “Chicken Butt”!

How to cultivate environmental awareness in schools
Read More
Six critical global issues: What are the world’s biggest problems and how can I help?
Read More
Why is gender equality important?
Read More
Apply Now
Enquire Now
Call Back Request